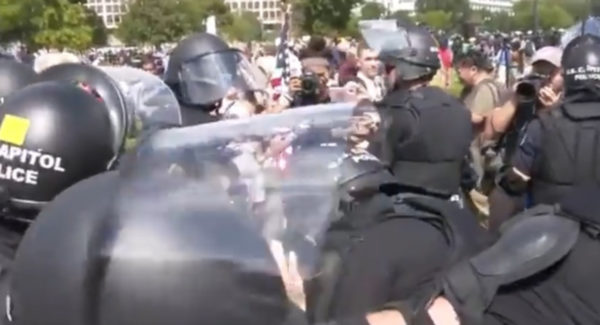 During the Justice For J6 rally in Washington DC an armed masked man posing as a protestor was surrounded by Capitol Police and escorted out of the area upon the discovery that he was actually a federal law enforcement officer. Unlike many individuals jailed on seemingly harmless charges on January 6, the federal officer will not be facing charges for having a gun during the rally.

While some warned of a potential protest sabotage at the hands of undercover federal law enforcement ahead of the Justice For J6 rally in Washington, D.C. after multiple reports surfaced in recent months showcasing evidence of undercover federal involvement on January 6, but the September 18 event went largely without incident. However, in one bizarre instance that has been widely mocked online, a masked man was surrounded by riot gear-clad Capitol Police upon the discovery that he was carrying a firearm on his person, drawing concern from journalists, protesters, and those who were following the protest that day at home.

Americans have been consistently mocking the “pathetic” attempt by the government to infiltrate the event with undercover federal law enforcement over the days following the protest. “These guys would be great undercover at a golf course on Martha’s Vineyard,” tweeted Donald Trump Jr. after photos of what appears to be undercover federal law enforcement made waves online. (READ MORE: EXCLUSIVE: Paul Gosar Tells National File Whitmer Kidnapping Case Is ‘Proof In The Pudding’ Of Fed Infiltration On 1/6)

Fed 1: Definitely not a firearm in my pocket… I’m just happy to see you.

These guys would be great undercover at a golf course on Martha’s Vineyard. https://t.co/4YEzaDix43

Amid fallout from the armed undercover federal law enforcement officer’s incident with Capitol Police, the Associated Press is now reporting that the individual was supposedly working with “US Customs and Border Protection,” and will not face charges for bringing a firearm to the protest.

“A federal law enforcement officer was arrested carrying a gun at Saturday’s rally at the U.S. Capitol billed to support the suspects charged in January’s insurrection but will not be prosecuted.

The 27-year-old New Jersey man is an officer with U.S. Customs and Border Protection. He was arrested by Capitol Police for illegally possessing a gun on the grounds of the Capitol after people in the crowd reported seeing him with a handgun and notified nearby officers.”

The AP report also claims that his “arrest and presence at the event were surprising because the rally was billed as an event to support those who have been charged in January’s riot.”

In other news...
The Anti Gun Lobby Is Like The Taliban
Milley Lied To Trump In Defense Of BLM, Said ‘They Are Not Burning It Down,’ Promoted ‘Sy...
GOP Introduces Articles Of Impeachment Against Biden ‘Not Capable of Being Commander-in-C...
Union: Miami “police chief” under investigation for doing the same thing he just fired tw...
DR. REINER FUELLMICH, We are close to a tipping point
AP Top 25: Clemson and Ohio State Slide as Penn State Jumps
0 Comments
Inline Feedbacks
View all comments