Big Ben Might Be A Big Problem In Pittsburgh 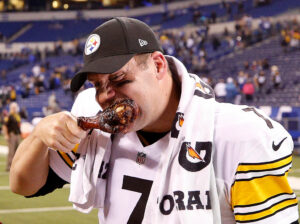 When Ben Roethlisberger announced in the offseason that he was returning to Pittsburgh for what seems like his hundredth season, the news was met with all the joy of a teenager watching his mom dance the electric slide at a neighbor’s graduation party. That lack of excitement has carried over to the regular season now that Big Ben has been mediocre at best.

But, we’ll give him this. At least the quarterback recognizes his own Pitt-falls.

Ben Roethlisberger on the #Steelers new offense still not showing much improved production from last year: “It’s frustrating. I put a lot of stinking time in, more than I probably ever have.”

Though the Steelers are now 1-1, that record is a bit misleading. It could actually be worse. They could easily be winless two weeks into the season but for a questionable fourth quarter call against the Bills, which gave the ball back to the Steelers with just enough time to march down field and score the go-ahead TD in Week 1. Through two weeks, the only consistency the Steelers offense has shown has been their inconsistency, and Big Ben is a big reason why. His stats are pathetically average: an 85.6 passer rating, two touchdowns, a pick, and few big plays.

“Right now, my play is just not good enough,” Roethlisberger said following Sunday’s loss to the Raiders. “If I play better, we have a chance to win the football game, so that loss, I’ll take that. I’ll apologize to the fans. For that home opener, they were awesome. And it’s disappointing we didn’t get that (win).”

Pittsburgh dialed up just eight deep passes Sunday, only two of which were completed. “It’s frustrating because I’ve put a lot of stinking time in — probably more than I ever have,” said Roethlisberger.  “I’ve got to get it fixed because I am frustrated I am not playing well enough.”

Short of reviewing PornHub’s latest in lieu of game film and filling the Gatorade bottles with Wild Turkey, the Steelers will have to bank on Ben finding the fountain of youth.

“The good news is it’s still early. There’s a long road ahead of us, a lot of time to get it fixed,” said Roethlisberger.

“So, I’ll work on me getting myself ready to go and making better reads and better throws and trying to put us in a situation to win a football game.”

Get excited, Steel City, but also grab some IC Light just in case. You’ve still got another 15 games of Ben to look forward to!