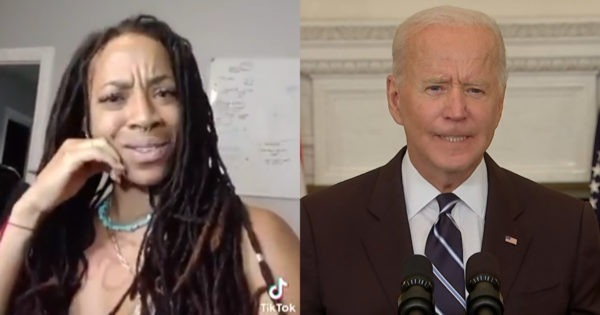 In a viral video that has nearly half a million views on Twitter even after being banned from TikTok, Megan McGlover addressed Joe Biden’s vaccine mandate for companies with over 100 employees.

“Fool talking about, ‘my patience is wearing thin,’ Who the f**k is he talking to? As long as your patience don’t get as thin as that hairline, I think we’ll be alright. I am not your child, I sure ain’t your b*tch. You’re talking about, ‘Your patience is wearing thin’ These people have lost, they’re acting like they, you know what I’m saying? Are they paying your bills and d*cking you down?”

She added, “I saw that little clip, I said oh, he’s crazy. He really thinks he, he really thinks I’m his hoe. ‘My patience is wearing thin, I need you to get on that boulevard and bring me my money’ You ain’t my pimp, n***a! What the hell is wrong with these people? He really said that sh*t out of his mouth.”

My favorite response to Joe Biden’s speech yesterday. She is

Speaking to National File, McGlover said, “I made this video and make other videos because the American people are losing their voice, they’re losing their hope and I can’t allow that. My Mother, whose 10-year death anniversary is this month, taught me to Speak Up and don’t allow others to shame you when you’re standing for what is right, my grandmother taught her the same.”

“It’s simply in my blood to STAND and not bow or break for immortality and injustice. Now, I am a Black (African American) Female who is a lesbian… I’m the main person who is supposed to be protected from the big-bad-racist system, right? Then you tell me why am I being censored, why was everything on my page ok until I went viral?” McGlover added, “All of a sudden, my videos went against their guidelines once the American People rallied behind me. What I hear mostly, about all of my videos especially my response to Joe Biden is, ‘Megan you said exactly what I was thinking, exactly what I wanted to say…’ Well guess what my extended family, I got your back, cause I ain’t shutting up!”

Y’all, THEY SHUT DOWN MY TIK TOK. Vax mandate Biden was SO offended by my videos that he had to try and shut me up. He thinks I’m going to back down and get in line.
Well guess what, I’m just getting started and now I’m mad as hell!
Help me fight back

National File contacted TikTok and asked whether the ban was politically motivated, and whether the platform faced outside pressure from the United States government – which has previously sought to ban TikTok due to its Chinese ownership – and did not receive an immediate response.