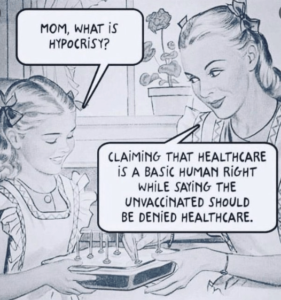 Welcome back to Day 241 of the Harris* Administration! Let’s dive right in:

First, a post I forgot to include in last week’s catch-up post. Want to see Mike Rowe smack down a Vichy Republican who tried to start with him? Of course you do!

9/5 – As a doctor, here’s my message to anyone who thinks it’s OK to deny medical treatment to those unvaccinated against Covid

Countdown to this doctor getting memory holed on social media in 3, 2, 1…

9/9 – New Woke ‘Cinderella’ Movie Flops, Is Getting Torn Apart by Even Critics

Having the Fairy Godmother as a nonwite dude in a dress? What could possibly go wrong?

9/11 – Fauci Struggles to Explain Why People With Natural Immunity Should Take Vax: ‘I Don’t Have A Really Firm Answer For You On That’

Or any answer, for that matter

I wasn’t even going  to check out whatever mush Biden* was going to serve us for 9/11 until I read the article. As I watched it I felt like I was watching the original Star Trek episode, “Patterns of Force” (The Nazi planet one), and was sitting through a John Gill speech. Did anyone else get the same feeling?

The Wuhan Pnemonia and the Boogie Wuhan Flu were a roadmap – expect more.

9/13 – Leftists cheer as a violent man assaults a woman

If it sounds like a Babylon Bee headline, it sort of is. But this headline and story are very much real.

Quietly. I wonder why?

*sigh* Meet your next Governor of Virginia. The 9/16 debate between McAuliffe & Youngkin summed up the two parties in The Old Dominion. Youngkin won the battle but lost the war. He outdebated McAuliffe (who avoided risking an outburst by not taking any of Youngkin’s bait and keeping his responses bland) & won the debate, but didn’t punch hard enough to move the needle. The debate felt like a microcosm of Republican politics in Virginia – Mcauliffe is running a campaign to become Governor, while Youngkin is running a campaign to put “Former Gubernatorial Candidate” on his resume.

You’ve already read stories about Dubya’s wretched 9/11 speech, but nobody brings the heat with short posts like Kurt Schlichter.

The slogan for today’s Democratic party should be the reverse of the 80s GI Joe cartoons – “And not knowing is half the battle!”

Friendly advice to anyone with an (R) after their name: When a loon like Keith Olbermann is praising you, you’ve gone way off the rails

History will never forget how FDR withdrew the military and abandoned bases, weapons, and equipment in Hawaii, relying on the kamikazes for security. https://t.co/qp8TzoP1eb

The post The Week in Radical Leftism, 9/17/21 appeared first on Flopping Aces.

In other news...
France Slams Biden for Being Cut Out of Anti-China Deal: 'Stab in the Back'
Bret Baier reacts to Pentagon admitting US drone strike killed civilians
Pics Reveal Dems Removed Masks At Ground Zero As Soon As Cameras Turned Off
ROCKED ON THE RADIO: Roger Stone Gets Served, Live, On-The-Air
A Day Like No Other
Clarence Thomas: Supreme Court could be 'most dangerous' branch of government
0 Comments
Inline Feedbacks
View all comments