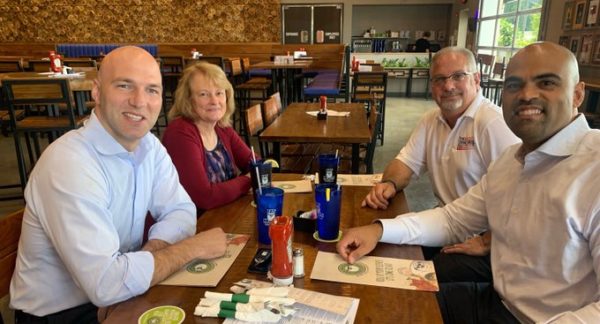 Rep. Anthony Gonzalez (R-OH) announced that he will not be seeking re-election in a statement on Thursday. “While my desire to build a fuller family life is at the heart of my decision, it is also true that the current state of our politics, especially many of the toxic dynamics inside our own party, is a significant factor in my decision,” Gonzalez said. The Ohio rep. was one of ten GOP U.S. Representatives who voted to impeach President Trump following the January 6 protests.

“The President of the United States helped organize and incite a mob that attacked the United States Congress in an attempt to prevent us from completing our solemn duties are prescribed by the Constitution,” Gonzalez said in a January 13 statement regarding impeachment. He also cited the long-debunked claim that the crowd was responsible for the death of Capitol Police Officer Brian Sicknick in his statement. Media outlets breathlessly reported on accounts of Sicknick being beaten to death with a fire extinguisher only for medical examiners to determine that the officer died of natural causes after suffering two strokes. “When I consider the full scope of events leading up to January 6th including the President’s lack of response as the United States Capitol was under attack, I am compelled to support impeachment,” Gonzalez concluded.

Gonzalez was also one of 35 GOP representatives who voted for a 9/11 style commission to “investigate the events of January 6” earlier this year. The congressman was later censured by the Ohio Republican Party. Similar measures were taken against Liz Cheney by the Wyoming GOP.

“RINO Congressman Anthony Gonzalez, who has poorly represented his district in the Great State of Ohio, has decided to quit after enduring a tremendous loss of popularity, of which he had little, since his ill-informed and otherwise very stupid impeachment vote,” Trump said in a statement on Friday. Trump went on to say that the news was “no loss for Ohio or out Country” while endorsing primary challenger Max Miller. The 45th president also suggested that Gonzalez would end up as a cable news commentator.

“RINO Congressman Anthony Gonzalez, who has poorly represented his district in the Great State of Ohio, has decided to quit after enduring a tremendous loss of popularity, of which he had little, since his ill-informed and otherwise very stupid impeachment vote… pic.twitter.com/w84y0UIelE

In other news...
Woke General HATES America & Loves China | You Are Here
Doddering White House Resident Rants About GOP Governors and Spins Conspiracy Theories
The Scammers Are Back
Home Defense: Why you should use an AR-15?
It’s Later than You Think
Photos of innocent Afghan children killed by U.S. Drone strike emerge
0 Comments
Inline Feedbacks
View all comments