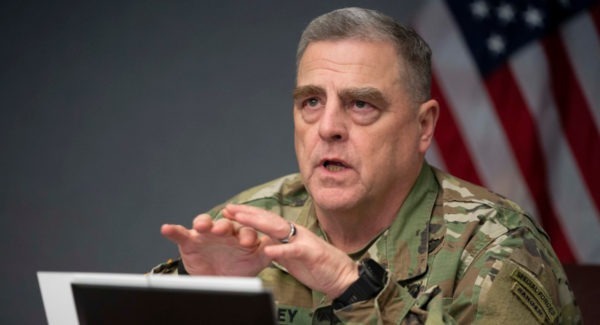 General Mark Milley, wholly admitting to secretly calling a top Communist Chinese General twice behind President Donald Trump’s back to provide China with aid and comfort in the event of potential US military action against the CCP, is saying that his actions were “perfectly within the duties and responsibilities” of his position.

Gen. Mark Milley, who has been widely accused of “treason” for providing aid and comfort to the Chinese military in two seperate phone calls behind the back of President Donald Trump, has doubled down on his claims that the moves were “perfectly within the duties and responsibilities” of his position as Chairman of the Joint Chiefs of Staff. (BREAKING: House Republicans Request AR 15-6 Investigation Into Gen. Mark Milley Over Secret CCP Calls)

Milley, en route to Europe amid accusations of “treason,” told the Associated Press that the secret calls to the military of our nation’s greatest geopolitical enemy are “routine” and were done “to reassure both allies and adversaries in this case in order to ensure strategic stability.” However, Milley did not explain how warning an enemy of a potential incoming US military attack bolsters the stability of American military strategy.

“I think it’s best that I reserve my comments on the record until I do that in front of the lawmakers who have the lawful responsibility to oversee the U.S. military,” Milley said. “I’ll go into any level of detail Congress wants to go into in a couple of weeks.” (BOMBSHELL: Milley ADMITS To Secretly Calling CCP General, Promising Advanced Notice Of Attack Amid Accusations Of ‘Treason’)

Former Trump Administration Secretary of Defense Christopher Miller recently said that he “did not and would not ever authorize” General Mark Milley’s calls with the CCP. However, it has been reported he and Defense Secretary Mark Esper had “full knowledge” of the secret calls, including “about 15” other people. Esper was reportedly significantly involved in the secret CCP calls alongside Milley. “Milley was absolutely not going rogue. Esper took the initiative on this in October. Esper asked his own policy folks to backchannel the message. Milley’s message followed Esper’s,” said Washington Post columnist Josh Rogin after speaking to a senior defense official who confirmed the allegation.

A drone strike on so-called “ISIS-K” terrorists in Kabul that Milley once called a “righteous strike” in late August has been revealed to have actually killed an innocent Afghan aid worker and 9 members of his family, including 7 children. The youngest child indiscriminately slaughtered by the Biden regime was 2 years old, as National File reported.