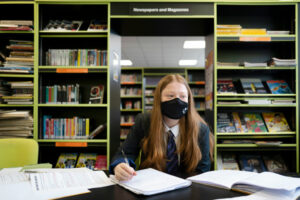 Of all of our country’s growing concerns, the decline and radical takeover of public schools are the most consequential. Parents have taught their children to believe the information they receive from their teachers. It is not optional. It shows up on a test, and teachers then grade the information as a fact.

For students in California, that system has become a frightening means of indoctrination.

This week, the nonprofit group Parents Defending Education publicized photos of the inside of a classroom at Alexander Hamilton High School in Los Angeles. In them, an American flag lays crumbled atop a piece of furniture. Is the teacher not into flags? Not at all. The teacher took down the American flag and replaced it with a Palestinian flag, a transgender pride flag, a Black Lives Matter flag, and a LGBTQ+ flag.

Those are interesting choices. Yet the classroom’s flags are secondary to its posters, including one that reads “F*** the police.”

Got that? Alexander Hamilton teachers don’t allow the American flag on their walls but will hang a F*** the police” poster in its place. That’s education.

And while the Los Angeles Unified School District says the school will take the flags down, they refused to comment on the posters.

“L.A. Unified is aware of the specific classroom decorations,” the district said. “The specific posters will be taken down. We maintain and uphold student and staff confidentiality and therefore cannot comment on any of our students or employees.”

So the students will continue to stare at a Marxist BLM flag Monday through Friday. Isn’t that helpful? Keep in mind, Alexander Hamilton High School claims to teach history in this classroom.

No wonder young Americans want to re-write history — they don’t understand it. Far too many history teachers, such as the one in this classroom, are lying to them.

The district should remove from the high school anyone involved in hanging these posters. These signs are not political. They are hateful, dishonest, and divisive. So, of course, some nut hung them in a California public school.

My buddy’s friend makes $96 hourly on the internet. She has been without artwork for five months however in the final month her charge emerged as $12747 really on foot on the internet for some hours. study more on this net internet site….. ­http://www.smartcash1.com