Illegal Aliens Massed Under Bridge Along Texas Border Doubles From 4,000 to 8,000 Overnight 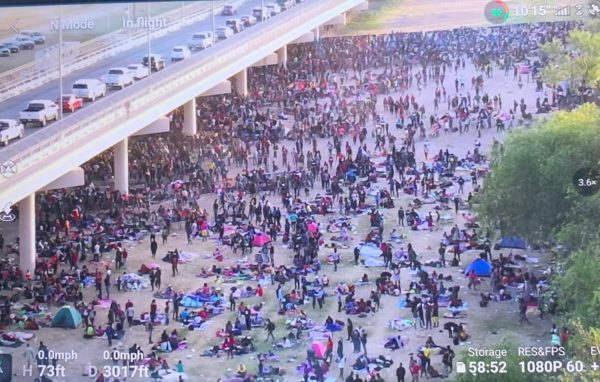 Thousands of migrants have amassed under a bridge in Del Rio, Texas that connects with Mexico. According to Bill Melugin of Fox News, the crowd more than doubled in size from 4,000 to roughly 8,200 over the course of just a single day. According to border patrol officials, the majority of those seeking entry to the United States are Haitians.

According to Melugin, Border Patrol officials described the situation as “out of control” and stated that they were overwhelmed. Drone footage from Fox News captured the scope of the migrant caravan that had doubled overnight. According to Fox, border officials recorded over 200,000 encounters with illegal immigrants seeking entry to the United States this past August, marking the second straight month that figure was exceeded. These numbers are up roughly 317% over August, 2020.

BREAKING: Our drone is back over the international bridge in Del Rio, TX. Per source, the number of migrants waiting to be processed has now swelled to approx 8,200. It was 4,000 yesterday AM. Doubled in one day. BP overwhelmed, & I’m told situation is “out of control” @FoxNews pic.twitter.com/ThJJJ0JWCT

However, many conservatives noted that Abbott seemingly conflated “points of entry” – which could be any gap in security along the border – with ports of entry, the legal ways to enter the United States from Mexico.

“The border crisis is so dire that the U.S. Customs and Border Protection is requesting our help as their agents are overwhelmed by the chaos. Unlike President Biden, the State of Texas remains committed to securing our border and protecting Americans.” the governor continued.

Abbott later said that the Biden administration reached out in regards to shutting down the border crossings only to reverse course hours later. “Six hours after U.S. Customs and Border Protection requested help from Texas to close ports of entry and secure the border, the Biden Administration has now flip-flopped to a different strategy that abandons border security and instead makes it easier for people to cross illegally and for cartels to exploit the border,” Abbott’s office said.  The statement went on to say that Abbott had directed the Texas Department of Public Safety and the Texas National Guard to maintain their presence at and around ports of entry to deter crossings.