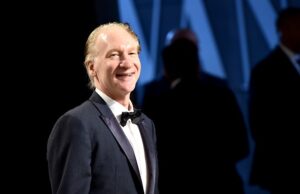 Bill Maher has long been a celebrity spokesman for the left. But nowadays, as we’ve previously noted, he is well on his way to losing his liberal membership card.

The latest example came during an appearance on Jimmy Kimmel Live, when Maher accused the mainstream media of “scaring the s*** out of people” over the COVID-19 pandemic. Ad because of it, Democrats are afraid to leave their homes, he added.

“I have to cite a survey that was in The New York Times, which is a liberal paper, so they weren’t looking for this answer,” Maher told Kimmel, while addressing some of the cities he intends to tour here soon.

“But they were talking about this, the question was, what do you think the chances are that you would have to go to the hospital if you got COVID. And Democrats thought that was way higher than Republicans. 41% of Democrats, and the answer is between one and five percent.”

He continued by addressing the left specifically.

“Liberal media has to take a little responsibility for that, for scaring the s*** out of people.”

Of course, some of this message was self-serving, as Maher will be performing, and selling tickets for those performances. But yet again, his point was fair.

“And the reason why I’m bringing this up is because it’s much harder for every touring act to sell tickets in blue states,” Maher said. “Whereas in red states, it’s all good to go. So I just want to say to those people in Raphael, in Pittsburgh, and New York, I ain’t gonna give it to you. I promise, it’s safe. We’re doing everything we can. There’s distancing, there’s masking. Enjoy. Live life. Embrace life.”

Click this link for the original source of this article.
Author: Sam Amico