Within the last couple of months, on top of all the problems the country is facing, Americans noticed a drastic change to the so-called American dream. It started with a couple of cents here and there and before long, gas prices were topping $3 a gallon. That doesn’t include the number of Americans still struggling to make ends meet due to the COVID-19 pandemic. Prices of gas, food, and clothing have gone up. But according to the latest data released by the Bureau of Labor Statistics, the average American spent more on taxes than they did on food, clothing, entertainment, and healthcare – combined.

Calling each American household “consumer units”, the Consumer Expenditures Survey revealed the startling news that Americans are paying more in taxes than on themselves. The survey found the average unit spent $16,839.89. That includes healthcare, food, clothing, and even entertainment. Although expensive, it fell short when compared to the $17,211.12 that each unit paid in taxes last year. 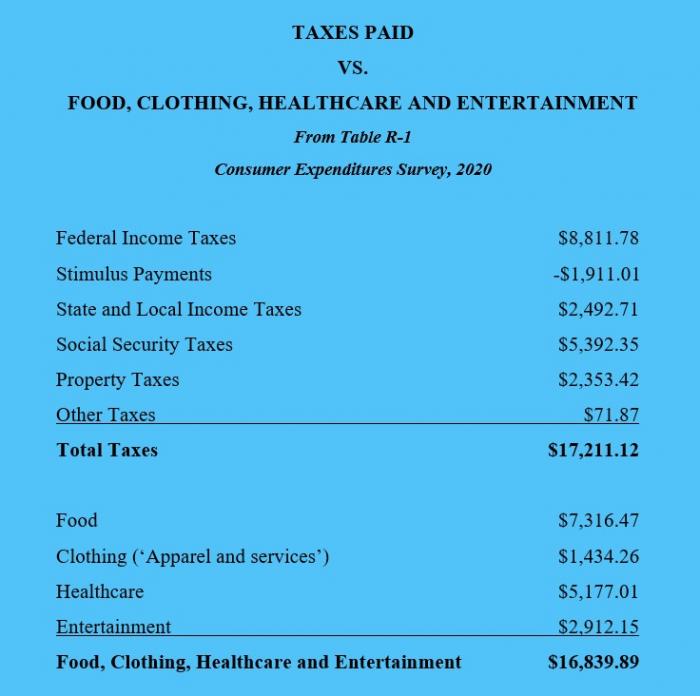 While Americans are paying more to the government, President Joe Biden recently praised the economy for how quickly it recovered from the COVID-19 pandemic. When compared to other nations, the U.S. has recovered rather quickly as a record 10.9 million jobs were created, but most Americans are still struggling to make ends meet.

As many Americans face financial hardships on a daily basis, President Biden on Thursday continued to push his “Build Back Better” agenda that would come with an extravagant $3.5 trillion spending bill. But Biden was sure to remember the American taxpayer, saying, “I know many Americans are still struggling to make it through each and every day. For too many, it’s harder and harder to pay the bills — food, gas, health care. I get it.”

But even as many Americans are forced to get numerous jobs just to afford some semblance of the American dream, Biden said, “As I’ve said many times before, I believe we’re at an inflection point in this country — one of those moments where the decisions we’re about to make can change, literally change the trajectory of our nation for years and possibly decades to come. Each inflection point in this nation’s history represents a fundamental choice. I believe that America at this moment is facing such a choice, and the choice is this: Are we going to continue with an economy where the overwhelming share of the benefits go to big corporations and the very wealthy, or are we going to take this moment right now, to take this country on a new path? One that invests in this nation, creates real, sustained economic growth, and that benefits everyone, including working people and middle-class folks.”

Click this link for the original source of this article.
Author: Jeremy Porter