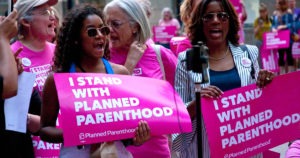 Planned Parenthood is rolling out an abortion by mail program in the Washington, D.C. metro area, allowing women to consult with abortionists via telemedicine and receive abortion drugs through the mail, so that they can kill their unborn child without ever leaving the comfort of home. The new program is the second of its kind of the United States, with Planned Parenthood already offering abortion by mail services in the St. Louis area.

The abortion by mail rollout comes in light of a Biden administration change to FDA rules allowing for abortion inducing drugs to be delivered by mail, contrary to a January Supreme Court ruling which required in-person pickup to obtain the lethal drugs. According to the FDA, Planned Parenthood, and other abortion advocates, the abortion by mail program will help protect women – or “people seeking abortions” – from the perils of COVID-19 as they will no longer have to travel to a doctor’s office to receive the medication.

Abortion advocates also point to the so-called convenience of the program, with some even stating that it will assist women may have trouble finding childcare for their already-born children as they go to abort their baby. The mail delivery abortion service will be available in Maryland, D.C., and Northern Virginia via Planned Parenthood’s Washington Metropolitan outfit.

According to a report from The Washington Post, women will qualify for Planned Parenthood’s abortion by mail program until the 8th week of pregnancy. The consultation and drugs cost $525, though financial assistance is available. The report also states that since it’s recent rollout, telemedicine abortion appointments have been completely booked.

Planned Parenthood’s abortion by mail rollout comes as several states have moved to ban the service, with pro-life advocates pointing to the ease with which a child’s life can be snuffed out as well as raising concerns regarding the mail transport of lethal medications.

Concerns surrounding sex trafficking have also played a roll in opposition to abortion by mail, even by abortion advocates, with many warning that women living at the hands of abusive pimps and human traffickers could be forced into aborting their child with virtually no chance to cry for help.