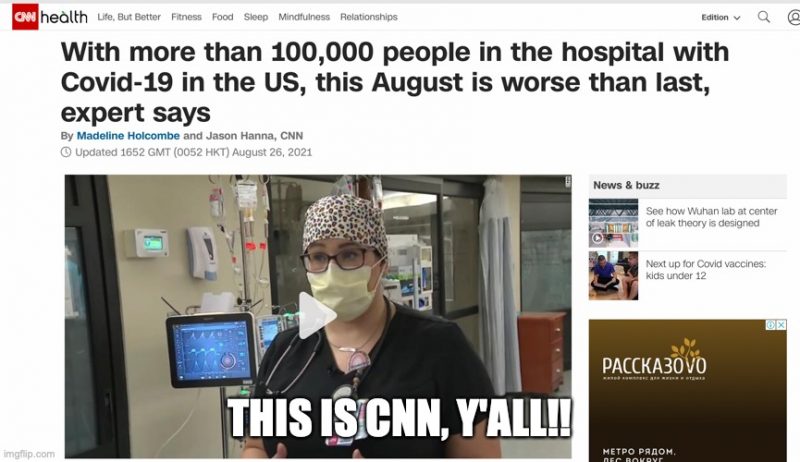 The source of this report is not Alex Jones, or some Big-Tech banned website, or Rumble, Bitchute or some clandestine underground indy press publication… like The Duran…

The source for this report is CNN. Let’s have a look at the splash page for the piece:

It looks like the “Support Democrats at any cost!” network is experiencing an attack of honesty.

Actually, honesty is the hostage of politics here, as CNN is most likely merely trying to save itself by doing the “popular” thing and doing anything possible to throw Joe “Imposter” Biden under the bus for any and all policy moves. This is ostensibly designed to trigger 25th Amendment proceedings (which have now been requested in a Republican representative’s letter to Cackling Kamala, who would become the occupant of the Oval….

But at the same time, this bit of reporting does give us some really interesting and useful perspective, especially in terms of the drives to mandate vaccination and/or lockdowns across the United States, which is getting a massive onslaught of “Delta” COVID-19. Let’s look at the text of the piece, written by Madeline Holcombe and Jason Hanna of CNN:

(CNN)More than 100,000 people are hospitalized with Covid-19 in the US — the first time that level has been reached since January — as medical workers say they’re once again struggling to treat waves of patients.

The latest figure, amid a summer surge in Covid-19 cases driven by the highly transmissible Delta variant, is also more than double what it was on the same day last year, when vaccines were not available as they are now.

Hospitals and researchers have been saying the vast majority of this year’s hospitalized patients are unvaccinated. The availability of vaccines makes the current hospitalization surge tragic, Dr. Paul Offit, a member of the US Food and Drug Administration’s vaccine advisory committee, told CNN Wednesday.

The numbers now … are actually in many ways worse than last August,” Offit said. “Last August, we had a fully susceptible population, (and) we didn’t have a vaccine. Now, we have half the country vaccinated … but nonetheless the numbers are worse.

The Delta variant is one big game changer,” he said.

Covid-19 hospitalizations and cases have soared since late June as the Delta variant gained dominance in the US.

More than 100,317 Covid-19 patients were in US hospitals Wednesday — more than six times higher than the figure was roughly nine weeks ago, according to the US Department of Health and Human Services.

The only other period that figure was above 100,000 was from late November to early January, when the country saw a major surge in cases.

Infection and hospitalization rates among unvaccinated people were 4.9 and 29.2 times, respectively, those in fully vaccinated persons on July 25, researchers from the Los Angeles County Department of Public Health wrote in the study, which was published this week by the US Centers for Disease Control and Prevention.

Very few fully vaccinated people with coronavirus infection went to a hospital: 3.2%, of them were hospitalized, 0.5% were admitted to an intensive care unit and 0.2% required mechanical ventilation, the researchers said.

The study included data on coronavirus infections that occurred in Los Angeles County from May 1 through July 25. The data, which involved both vaccinated and unvaccinated people, included only laboratory-confirmed cases of infection and were representative of infections in the county alone, not the entire United States.

The findings in this report are similar to those from recent studies indicating that Covid-19 vaccination protects against severe Covid-19 in areas with increasing prevalence of the SARS-CoV-2 Delta variant,” the researchers wrote.

The country has averaged more than 152,400 new Covid-19 cases a day over the past week — more than 13 times what the figure was about nine weeks ago, according to data from Johns Hopkins University.

The writers tried then to tie the upsurge in COVID to the fact that about half of the nation remains jabless, using free-state Florida as the whipping post:

With 48.3% of the US still not fully vaccinated, hospitals are straining to keep up with incoming patients as cases rise.

Those dastardly deep red states (except Georgia, which “miraculously” voted for Biden…) Those backwards neanderthals…

And so the piece continues. However, the writers do not have the whole context, either because they do not realize that there is a broader context or perhaps in their zeal to blame Biden for this (to save their own ratings)… motives, anybody?

The broader context has to do with Delta itself, and of course the overall spread of SARS-CoV-2 in all its forms. Russia had its time dealing with Delta, as any nation in the world would. Panic over it did spur a vaccination jump in numbers: Russia had a 12 percent fully vaccinated count at the beginning of Delta’s interference with life, and now it has a 23% vaccination rate. A big jump, but nothing like the whole country. The rate of cases per day for a nation with a bit less than half the US population is about 20,000.

The United States is reporting an average of almost 150,000 cases per day.

How does this work? Shouldn’t a high vaccination rate lead to lower case per day reports? It sure isn’t with this, in fact, the overall trend in the US for the last two months has been up, up and up. Don’t believe me? Look at Johns Hopkins weekly case report chart:

Vaccination doesn’t work. And the crazy byline of Vaccination prevents serious illness is plainly a lie, with more and more reports coming from highly vaccinated countries like Israel that most of the hospitalized patients are FULLY VACCINATED against COVID-19.

This of course raises more questions, like Surely they know it doesn’t work, so why are they pressing us out of our jobs if we don’t take this stuff?

What is the real purpose behind the COVID-19 vaccine?

Of course, our CNN reporters have not made this connection. They have also never come close to asking the question Why is the United States having bigger problems with COVID than any other nation on earth?

Getting into these matters would be truly investigative reporting. We are certainly trying to get to these answers here, and it is still not possible to stitch a paper trail that answers these questions. But we can see the pattern, and it certainly looks like, at the very least, hysteria with a plan.

Reports like CNN’s do serve a purpose, though. The reporters, to their credit, did tell us some truth. They told us that things are not better in the US with the vaccines, and they told us that problems are continuing and even growing.

It is time to think, and time to pray.