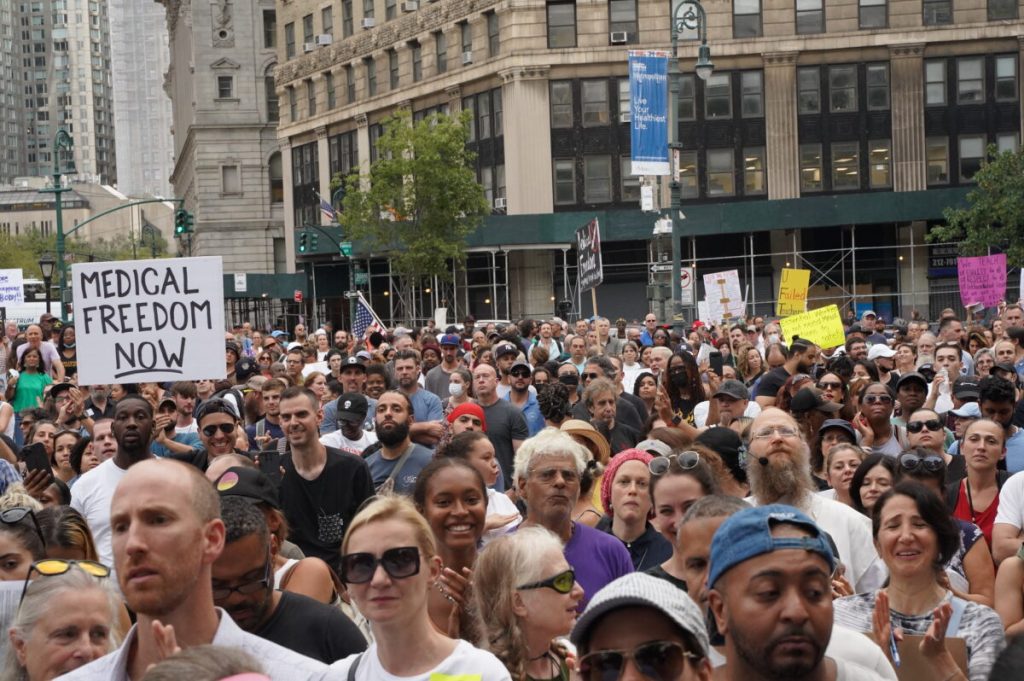 NEW YORK—Thousands of people opposed to the harsh COVID-19 vaccine mandates being imposed in New York City protested on Monday.

The large group, estimated to be in the thousands, gathered at Foley Square in the borough of Manhattan and later marched across the Brooklyn Bridge.

Their message: the city’s vaccine mandate for Department of Education employees infringes upon their freedom.

“You should have a right to choose whatever you do with your body,” Ricardo Alexander, a public school math and physics teacher, told the rally.

Alexander and fellow educators were joined by civil rights attorneys, Bill Pepitone, a conservative candidate for New York City mayor, and Rita Palma, founder of My Kids, My Choice, among others.

Pepitone harkened back to the Sept. 11, 2001, terror attacks, attempting to link that event to what’s unfolding now.

Michael Kane, a teacher in New York City who helped organize the protest with the Teachers for Choice group, told The Epoch Times in a recent interview that he sees the mandates as government overreach and illegal.

“We’re not anti-vaccine. We are just pro-choice,” he said.

One of the featured speakers was Del Bigtree, host of The High Wire podcast. He told The Epoch Times: “This is the biggest crowd we’ve seen yet. This is going to start happening all over this nation.

“The government of the United States needs to do this for us to win, it’s pressuring us to become the citizens and the freedom fighters that we need to be to maintain the brilliance of this country.”

All New York City educators will have to provide proof that they received at least one COVID-19 vaccine dose starting Sept. 27 under the city’s vaccine mandate.

Those who don’t comply were originally told they’d be fired. An arbitrator, though, ruled last week that teachers who are granted religious or medical exemptions must be retained and assigned to non-classroom work.

Approximately 148,000 people work for the city’s Department of Education.

The ruling was a win for the United Federation of Teachers, a teachers union, but Kane said it didn’t go far enough.

Teachers for Choice plans to file lawsuits soon on behalf of teachers and other city workers in federal court against the mandate and others like it.

Click this link for the original source of this article.
Author: FreeSpeechFan