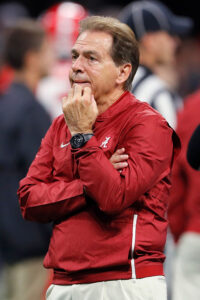 Rejoice, we’ve been white hot out of the gate here with the Outkick gambling picks. After a 7-3 opening weekend we followed it up with a 7-4 week two to run our record to 14-7 on the season. That’s a robust 67% winning percentage on the season.

Can we keep up that kind of winning percentage all season long? Almost certainly not. But can we continue to string together winning weeks? That’s the plan!

Which is why you have to #respectthepicks and constantly denigrate #fadethepicks guy who is having a really rough start to the year.

We will be down in Gainesville, Florida on the Outkick bus tour this weekend for the Alabama-Florida game. So for those of you who will be in town for that game, I’d encourage you to swing by and say hi. We’ll be in Lot 78 near the baseball stadium and you can’t miss our huge bus.

We’re in third week of the season, which means you can start to get a sense for how a team is coming together. So far Michigan State has looked really outstanding under Mel Tucker. The Spartans dominated Northwestern and then handled Youngstown State with relative ease.

Miami, meanwhile, got whipped by Alabama and then snuck past App State in a game that drew more attention for a cat falling from the upper deck than it did for the actual play on the field.

Based on what we’ve seen so far, I don’t feel like Miami deserves to be nearly a touchdown favorite on any decent team right now.

So start your weekend off right by grabbing the Spartans to cover on Friday night and maybe steal this game late.

This is one of college football’s great all time rivalries that we don’t get to see played any longer. The two teams haven’t played, in fact, since 2010.

And they’ve gone in totally different directions since Nebraska bailed on the Big 12, the Cornhuskers have mostly flopped and the Sooners have surged into one of the top teams in college football.

As for this season, believe it or not Nebraska has played two games since the embarrassing flop of a debut on the road against Illinois, winning both games against Fordham and Buffalo by a combined margin of 80-10. Granted both of those teams are comparative lightweights so are the Cornhuskers able to go on the road and give Oklahoma a real challenge?

The oddsmakers are telling you the answer is no.

But Oklahoma’s defense looked very suspect in the first game of the season against Tulane and I’m not convinced Oklahoma is going to blow the doors off Nebraska in this game either.

Which is why, deep breath, I’m taking Nebraska to cover the big number on the road in Norman.

Notre Dame is 2-0, but the Fighting Irish could easily be 0-2 on the season. Both wins over Florida State and Toledo required late scores. Now Purdue, which has played two bad teams in Oregon State and Connecticut, rolls into town with a 2-0 record for a in-state showdown.

And I have to tell you, I like Jeff Brohm’s squad as the underdog here.

Starting next week Notre Dame will play three straight ranked opponents and four in five weeks. But this Fighting Irish team is already playing to the level of the competition.

Now you’re telling me they’re going to win by over a touchdown against a Purdue team with the ability to score some points?

I just don’t see it at all.

The Boilermakers give Notre Dame a scare before losing by three. But a three point loss is a win for all of us taking the touchdown plus underdog. Boiler Up!

As I said above, we’ll be at this game on the Outkick bus tour and I look at it as an early test for Alabama in a regular season where the true tests may be relatively sparse.

The Tide play ranked opponents in three of the next four weeks — at Florida, Ole Miss and then at Texas A&M — and as dominant as Alabama was against Miami, Nick Saban was furious with the way the Tide played against Mercer. These kinds of weak performances against vastly inferior opponents typically bode poorly for Tide opponents the next week.

Meanwhile Florida has been a bit of of an enigma against two in state opponents to begin the season with 21 and 22 point wins over Florida Atlantic and South Florida. Even more interestingly, Dan Mullen has played two quarterbacks, Emory Jones, the presumptive starter when the season began, and Anthony Richardson, the electric back up quarterback who is dealing with a bit of a hamstring issue.

Richardson, at least so far, appears to be the more dynamic talent of the duo and he’s the kind of quarterback, mobile and able to extend plays, that has historically given Nick Saban defenses their biggest challenges. I know the Tide is rolling and that Saban’s Bama teams have often had their most dominant performances on the road against top 25 opponents, but I just can’t shake the idea that Dan Mullen’s going to be able to keep this one inside of two touchdowns.

And I also love the Florida offense to score enough to put this one over the total.

So give me the Gators and the over in the biggest game of week three.

Old Dominion at Liberty, the over 54

Huge Freeze is 12-1 in his last 13 games at Liberty, including a 10-1 record last season. it’s honestly amazing what he’s accomplished with the Flames.

Meanwhile Old Dominion was one of three FBS schools to sit out last season’s schedule and they have a first year coach, on the field at least, in former Penn State offensive coordinator Ricky Rahne.

In a battle of state of Virginia upstarts, I think both teams come out and score some points thanks to their offensive minded head coaches, surging over the 54 here.

I know Georgia had an explosive offensive performance against UAB on Saturday and I know South Carolina, despite the 2-0 record, is facing a great deal of challenges now that the SEC season begins for the Gamecocks.

But a 32 point line for two teams that have historically played each other tough, just feels monumentally massive to me and far too large.

How gargantuan is this line?

Since South Carolina joined the SEC in 1992 there has never been a game between these two schools decided by over 32 points. (In 2015, the margin was 32 exactly). Maybe this is the year where Georgia comes out and wins by five touchdowns or more, but I tend to think the Bulldogs, if they get up early, will ease into the win and play younger talent.

The wild card here, of course, is the Georgia defense still hasn’t given up a touchdown. So you could be looking at a 38-0 or 42-3 style game where the Gamecocks can’t even muster any touchdowns. But surely South Carolina can keep this one inside of 32 and score at least one touchdown.

Here’s yet another nervous bet on a big underdog — one of many I’m making this week — to keep things close. Give me the Gamecocks +32.

Auburn at Penn State -6 and the under 53

I talked earlier about how difficult it can be to forecast early season games. That’s made doubly hard when one of the teams playing, Auburn, has dominated Akron and Alabama State in the first year of a new coach regime. So how do you assess this Auburn team with a first year head coach, off two dominant blow out wins at home, when you think about them going on the road against a top ten caliber Penn State team for a white out scenario, the first truly big game in Happy Valley in over two years?

Ultimately this game, in my opinion, comes down to the two quarterbacks: Bo Nix against Sean Clifford. And while I don’t have a great deal of faith in either quarterback, I do trust Clifford way more, especially playing at home, than I do Bo Nix.

This feels like a low scoring game that Penn State takes control of late to win by a touchdown or more. So give me the Nittany Lions 24-17, meaning you get the cover and the under.

Stanford at Vanderbilt, the under 49

It’s a battle of the two best power five conference schools in America! And that’s not just because these were my two top law school choices. (Stanford didn’t admit me and Vanderbilt did, so I ended up at Vanderbilt where I met my wife and somehow found a career writing and talking about sports, at least initially. Imagine how the world might have turned out differently if Stanford had admitted me and I’d gone there instead of Vandy. I might be a tech bro billionaire who was hanging out at French Laundry with California governor Gavin Newsom. Outkick might have never existed. I might have become one of the foremost proponents of masks and lockdowns. And all of you reading this right now would have suffered immeasurable loss. But instead we’re all here trying to make money on week three of college football via gambling. Ain’t life grand.)

Credit to both Clark Lea and David Shaw for bouncing back to snag road wins in week two after tough opening week losses.

So what happens in this game? I think it’s a defensive struggle. Vanderbilt sells out to stop the run with a rapidly improving defense and a great defensive coordinator while Stanford slowly squeezes the offensive life out of the Commodores, who don’t have a great deal of offensive life in the first place.

Stanford wins, but the real play here is the under, which cashes with ease.

The perfect college football story would be USC attempting to rehire Lane Kiffin at the Oxford airport, several years after firing him at LAX.

Seriously, it couldn’t get any better than this. Well, maybe Kiffin live streaming the offer and turning them down would be perfect revenge.

Tulane has scored 35 at Oklahoma and 69 last week against Morgan State. Meanwhile Ole Miss has posted 43 against Louisville and 54 against Austin Peay. So the easy call here would be to hop on the over and expect points to rain down like crazy.

But I’ve got a sneaking suspicion this Ole Miss defense is much better than last year’s defense.

So that means I’m going to be one of the only people in America taking the under in this game. Feel free to call me an idiot if this game surges over 90 total points like the basic math would suggest.

#respectthepicks and get your own bets in as well with up to $1,000 no risk on your first wager.

Click this link for the original source of this article.
Author: Clay Travis