Imposter Joe trusts the Taliban to protect Americans… What?! [Video] 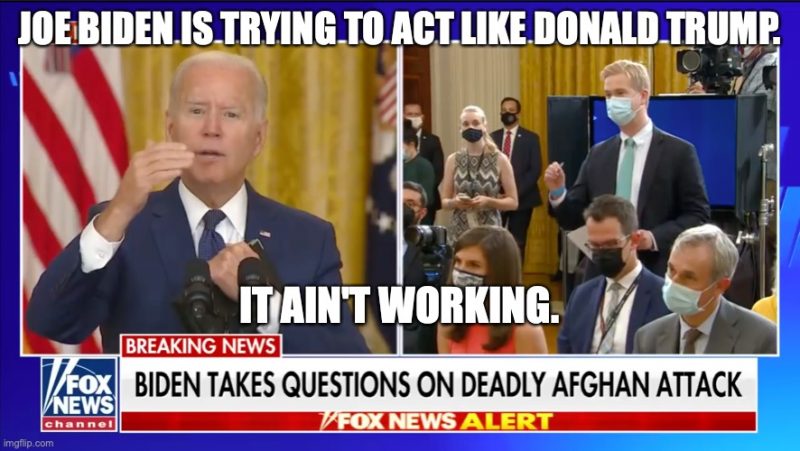 Fox News ran a piece severely criticizing our increasingly febrile Imposter-in-Chief for giving lists of American Green Card holders and citizen names to the Taliban, ostensibly to help them get safe passage to the airport in Kabul for evacuation. This is being seen as a step into total insanity. We are reprinting the full report, written originally by Yael Halon, below (sans Twitter images), and after it, we will expand and comment.

President Biden was blasted by critics on Thursday over a baffling report revealing that U.S. officials provided the Taliban with a list of American citizens green card holders & Afghan allies to grant entry into the outer perimeter of the city’s airport, where suicide bombers carried out an attack that killed 12 U.S. servicemembers earlier in the day.

Marine Corps Gen. Kenneth F. McKenzie Jr., commander of U.S. Central Command, confirmed in a press briefing that the United States “will continue to coordinate” with the Taliban in providing safe passage to the airport in Kabul, and that the U.S. military had been sharing “information” with the terrorist group to help prevent such attacks.

Critics were left dumbfounded, taking to social media to express their utter astonishment at the U.S. strategy to rescue American citizens and allies stuck in the region.

“The Pentagon just said they expect ISIS attacks to continue and are relying on the Taliban to help protect us. The Taliban are supposed to protect us?!” Outkick.com’s Clay Travis said. “This is insanity.”

Eli Lake, a columnist for Bloomberg Opinion wrote alongside the Politico story, “I never again want to hear about Biden’s competence, empathy or experience. This debacle is worse than 1000 Helsinkis. And I say that as someone who wrote that Helsinki was a humiliating disgrace.”

“Looking forward to the “withholding the names would have been racist/xenophobic” defense,” The Blaze CEO Tyler Cardon wrote. “The world’s greatest military is being led by morons.”

A defense official quoted in Seligman’s thread accused Biden of putting “all those Afghans on a kill list” by identifying them for the radical Islamic group. “It’s just appalling and shocking and makes you feel unclean,” he said.

Code of Vets, an organization committed to helping veterans in need, expressed a similar sentiment, sharing from their official Twitter page, “I am beginning to think there is something sinister going on. This level of incompetence cannot be real.”

Biden addressed his partnership with the Taliban during a press conference later Thursday, telling reporters that while he is unaware of a concrete list,  “It could very well have happened.”

“It could very well have happened?” He doesn’t know?!

Yep. Mr. Biden doesn’t know. How could he? The man does not even know where he is or what he is talking about much of the time, and this is a big crisis.

This is where election fraud gets us. There is just no way I can believe that Joe Biden was legitimately elected to the Presidency, and his running mate, Cackling Kamala, is beyond bad, so bad she makes Joe look reasonable.

That is very bad, indeed.

This situation is not just Fox hyperbole, either. When checking for real attitudes in the “critical of Democrat” range of ideas, it is always good to go visit the Clinton News Network (CNN) to see what they are saying. In checking CNN’s splash page, this is what we see presently:

Top billing and it does not look favorable to the demented Imposter by any means.

All of this that has happened, and what is yet to happen, is truly a moment of pause for America. Wokeism, “I want to be a female-male elephant flower” psychotic sexual obsessions, false racism, vaccine mandates and government control…

It is truly time to get back to basics, as individual citizens and as a nation. The United States is truly and completely the laughingstock of the world… and it only took seven months for Biden and his handlers to do this.