Tony Romo: ‘Oh My Gosh, I Am The Worst Announcer Ever’ 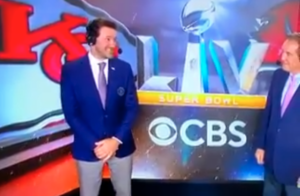 One day he was throwing touchdowns for Dallas, and the next he was in the booth with Jim Nantz, predicting plays with an effortless charm and swagger. After all, many former athletes try their hand at media upon retirement, but none had ever become the highest-paid analyst just three years after hanging up the cleats. By all accounts, he was simply a natural.

But Romo disagrees, admitting in a podcast interview recently that he was bland, boring, and frustrated with himself at the outset.

“I watched myself. It was so boring. You would’ve been like, ‘This guy needs to stop doing this right now.’ That was the start of me listening to myself,” Romo said.

“It was just trial and error and gaining an understanding of what I would want to hear. When I listened to it, I was like, ‘Oh my gosh, I am the worst announcer ever. I am so boring.’ I cringe already listening to myself, but that, I was like, ugh, disgusting.”

To give him some repetitions and confidence, top CBS brass put together a little bootcamp where Romo and Nantz could practice together on old game tape, the hope being that simulations would help Tony find his voice.

“I’ll give CBS credit, [chairman] Sean [McManus] and [president] David [Berson] got together and they came up with a plan. Jim Nantz and [director] Jim Rickoff came down and we did all these practice games, and I sounded like Ferris Bueller’s Day Off, the teacher. ‘Bueller, Buller.’ ”

Romo said that eventually he found his voice while trying to mimic other broadcasting giants.

“I tried being Jon Gruden, John Madden, Phil Simms, Troy Aikman, Cris Collinsworth…and what I found was one day, 50 times in doing games, it clicked for me, and not to say that everyone loves it, but I found my voice and the sound and the way I was saying it, I actually was like, ‘Oh, that was O.K.,’ and that’s a big deal for me to say that.”

Whatever was hiding within himself, Romo found it in spades. If he’s not the most popular NFL color commentator at this point, then he’s a close second only to Cris Collinsworth, who has been doing the job for thirty years. It’s an amazing ascension that will likely never be achieved again, and it’s all thanks to the same thing that made him a professional athlete: practice.

The post Tony Romo: ‘Oh My Gosh, I Am The Worst Announcer Ever’ appeared first on OutKick.

Click this link for the original source of this article.
Author: TK Sanders

In other news...
Trump Impeachment Witness Calls on Milley to Resign over Secret China Call
Libs CHEER and CELEBRATE man abusing women for money. (No, not Cuomo this time.)
Rocket Launched From Gaza Intercepted, Third Consecutive Night of Fire
Nothing Can Stop What is Coming.’ What If Nothing is Coming?
The new Axis of evil: the left-wing press, Permanent Washington & the Socialist-Democ...
Nancy Pelosi Doesn’t Care That China Commits Genocide Because It’s Working on Climate Cha...
0 Comments
Inline Feedbacks
View all comments