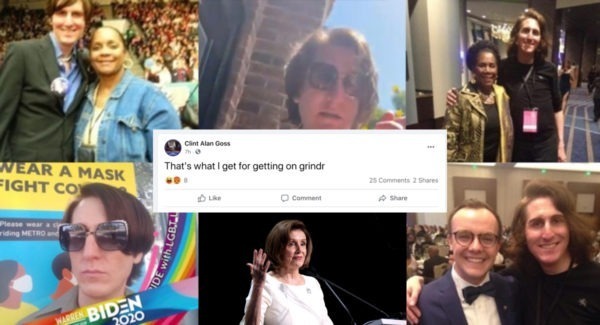 Yesterday, National File reported that a man identified as LGBT activist Clint Alan Goss was captured on video during a child predator sting operation led by an anonymous YouTube streamer. Goss claimed in the video and allegedly in explicit text messages to work for House Speaker Nancy Pelosi and other high profile Democrats, and appears to have been photographed alongside prominent Democrats including Rep. Sheila Jackson-Lee and Chasten Buttigieg, the husband of Biden administration Transportation Secretary Pete Buttigieg. In the video, it is revealed that Goss allegedly solicited sex from an individual he believed to be a 14-year-old boy prior to being approached by the YouTuber in the apparent sting operation.

Hours after National File published the story, Goss posted on Facebook, “That’s what I get for getting on grindr,” appearing to suggest that the alleged online interaction occurred on the homosexual dating site known as “Grindr.” National File reached out to Nancy Pelosi’s campaign prior to the original stories publication, but has still not received any response regarding Goss’ claims.

As National File previously reported, a man identified as Clint Alan Goss was captured on video during a predator sting operation by a YouTuber called “Ghost Change.” In the video, Goss was accused of soliciting sexual favors from what he believed to be a 14-year-old boy online. In response to the confrontation by Ghost Change, who live streamed the interaction on YouTube, Goss claimed to work for House Speaker Nancy Pelosi and Hillary Clinton. National File worked to confirm the identity of Goss and found a Facebook profile matching his description, which featured photos of him with prominent Democrats Sheila Jackson-Lee and Chasten Buttigieg.

“To be honest, um, I don’t understand where you’re coming from,” mutters Goss. “You don’t understand? So why don’t we have a conversation about it, cause I can get you some help, or I can get you locked up,” said the streamer. Ghost Change then states Goss’s full name, and explains that he “knows everything about” him. Goss replies, “So you know I work for Nancy Pelosi, I work for Hillary Clinton,” and denied any “sexual contact” during the chats apparently in the possession of Ghost Change.

“You chatted graphically to him. You said ‘I want to lick your hole,’ you said so much graphic stuff to him. You said plenty of graphic stuff. So if I were to show the cops here today, and they see what you said to what you believe was a 14-year-old, that is sex-” said the streamer, interrupted by Goss who said “I was trying to help you out.” Following a slight scuffle, Goss then tells Ghost Change to leave, enters what appears to be his apartment, and the streamer indicates that he was going to call the police.

Hours after the original publication of the article, Goss posted on Facebook “That’s what I get for getting on grindr,” appearing to suggest that the online interaction with what he believed to be a 14-year-old boy occured on the popular homosexual dating site “Grindr.” Prior to the aforementioned stories publication, National File reached out to Nancy Pelosi’s campaign for comment regarding Goss’ claims that he worked for her. National File has still not received any response from Pelosi’s campaign.