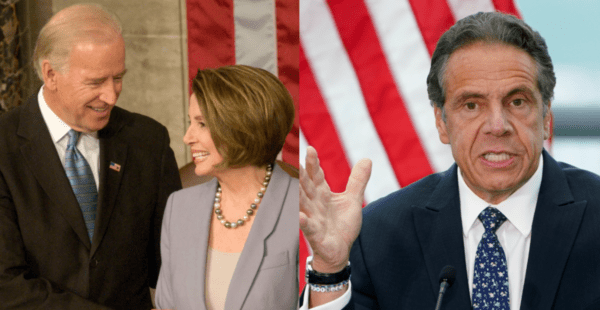 Speaker Pelosi and Joe Biden have both called on Andrew Cuomo to resign his position as New York Governor, after the state’s Attorney General said he sexually harassed and groped employees.

Letitia James, the New York Attorney General, held a press conference early Tuesday morning, to discuss her independent investigation of Governor Cuomo, over allegations he had sexually harassed both current and former employees with actions ranging from inappropriate comments to “groping, kissing, hugging,” and other unwanted physical advances. James confirmed that Cuomo was guilty of the allegations, and said his harassment violated federal and state law. As National File reported:

She continued to say that evidence “revealed a deeply disturbing yet clear picture: Gov. Cuomo sexually harassed current and former state employees, in violation of both federal and state laws” and that “The independent investigation found that Gov. Cuomo sexually harassed multiple women, many of whom were young women, by engaging in unwanted groping, kisses, hugging, and by making inappropriate comments.”

Worse, James says that “Further, the governor and his senior team took actions to retaliate against at least one former employee for coming forward with her story, her truth. Gov. Cuomo’s administration fostered a toxic workplace, and enabled harassment, and created a hostile work environment, where staffers did not feel comfortable coming forward with complaints about sexual harassment due to a climate of fear.” James released a full report on the New York Attorney General website.

Following the press conference, Speaker Pelosi called upon Cuomo to resign as Governor, and was joined later in this call by Joe Biden. “Under Attorney Letitia James, a comprehensive and independent investigation into the allegations against Governor Cuomo has been completed,” Pelosi said in a statement. “As always, I commend the women who came forward to speak their truth. Recognising his love of New York and the respect for the office he holds, I call upon the Governor to resign,” she concluded.

BREAKING: “I think he should resign” Biden says of Cuomo

This is a breaking story, and may be updated.