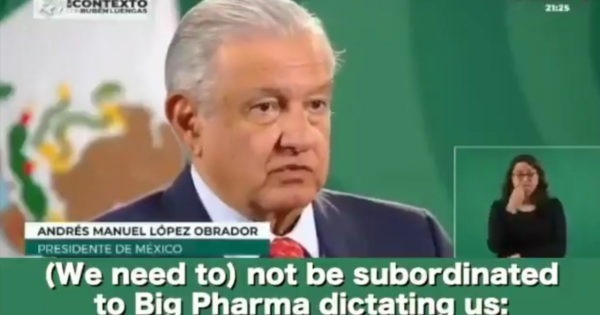 “We need to be careful because, as it’s obvious, pharmaceutical companies wish to make a profit,” Obrador said this week, “and would like to keep always selling vaccines for everyone. But we need to prioritize, we need to know if they’re needed or not. (We need to) not be subordinated to Big Pharma dictating us: ‘We need a 3rd dose, we need a fourth, we need to vaccinate children.’”

“There’s a powerful public opinion campaign induced by Big Pharma. If one explores the national and international press, and traces recommendations like these, one can perceive an important lack of scientific information to support these kinds of recommendations,” Ramirez stated. “And by contrast there are statements by Big Pharma executives that already take it for granted.”

As National File previously reported, Obrador has previously spoken out against lockdowns and mask mandates:

Mexican President Andrés Manuel López Obrador has described coronavirus lockdowns as “dictatorship” during a recent press conference with reporters. He described such lockdown measures as “fashionable among authorities … who want to show they are heavy handed, dictatorship”, according a report by the Associated Press.

López Obrador has strongly resisted efforts to introduce lockdowns and curfews in Mexico, despite the popularity of such measures in other Latin American countries. However, just as in the United States and Brazil, many state and local officials have defied the President and introduced various restrictions at lower levels of government.

Child vaccination supporters on Twitter were outraged by the Mexican president’s comments this week.