The Illinois Association of Police Chiefs honored East Peoria officer Jeffrey Bieber as “Most Outstanding Officer of the Year” for his impressive achievement on a case.

However, the association is having issues with Facebook over the attempts to reach out to people to promote a post honoring their patrolman.

Officer Jeffery Bieber had a life-threatening encounter with a domestic violence suspect earlier this year, February 2nd to be precise.

Bieber was sent to East Peoria after receiving information that the suspect had fled the scene in a vehicle. The suspect was initially cooperative until he attacked the officer. Jeffery was stabbed multiple times by the suspect who had pulled out a knife, he was wounded in the head and neck after stab wounds that led to his nerves being damaged with serious bleeding. 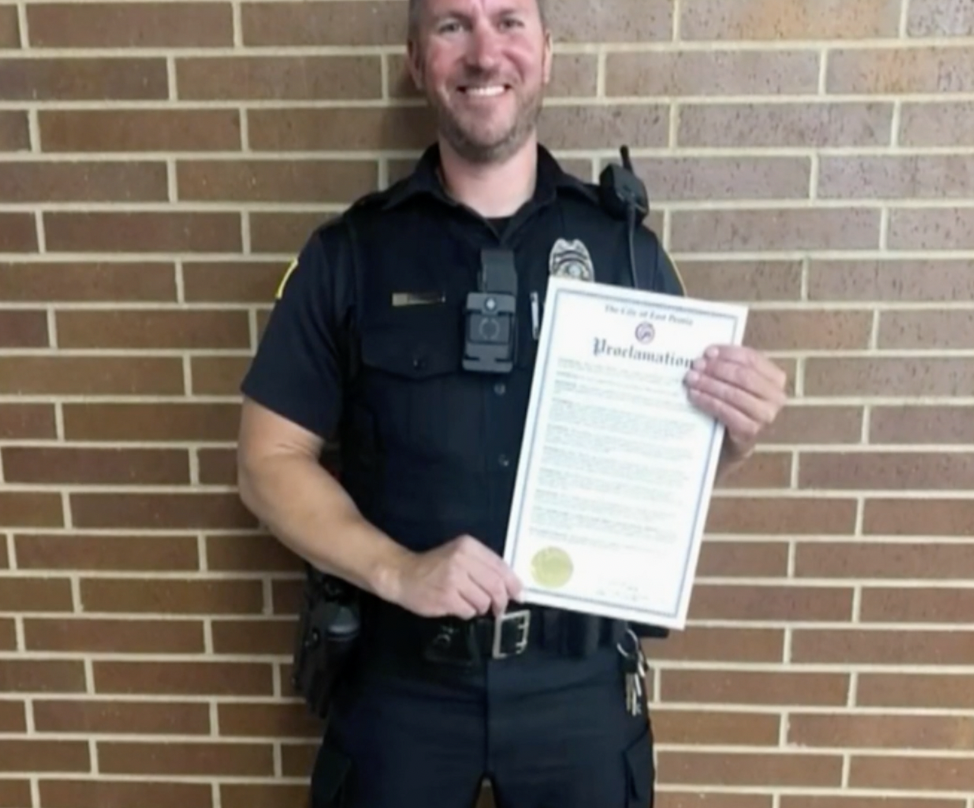 Bieber attempted to use his taser on the suspect with his efforts being unsuccessful, before responding to the call of his firearm where he fired four direct shots at the suspect, killing him.

“[Bieber] really did everything right,” Wojcicki told WMAY. “He fended off someone who was attacking him and he had to save his own life in the process. This officer was stabbed multiple times in the head and in the neck by a person in East Peoria.”

The currently serving president of the Illinois Association of Chiefs of Police, Hazel Crest Police Chief Mitchell Davis also had some comments on Officer Jeffery’s encounter.

“What happened with this officer was textbook of what we want from an officer before they use deadly force, and the community should be applauding and we want the community to know we’re doing our part as professionals to do things in a proper way,”

The association wrote a post on social media on Beiber’s encounter to honor the patrolman. Unfortunately, when the organization tried to pay to have the post promoted to reach a larger audience, Facebook turned it down.

Wojcicki said Facebook rejected the ad promotion saying that “it was political and it might affect the outcome of an election.”

Police Chief Davis also mentioned that their appeal to the denial of the promotion was also being rejected.

“We appealed that denial and they sent us back a response saying our post dealt with politics and a volatile subject that could be viewed to have political innuendos,” Davis said.

Both officers stated that the post had nothing to do about politics and that the most recent ad rejection was confusing, the association appealed twice but was further denied by Facebook.

“We require advertisers to complete our ad authorizations process and create ‘Paid for by’ disclaimers to run social, issue, and political ads. We have reached out directly to the Illinois Association of Chiefs of Police to explain how to run this type of ad.” a representative from Facebook said.

Davis said the association supports Facebook’s standards against improper content, but that the policy’s implementation in this situation warrants more investigation. Also, Wojcicki is encouraging people to join a Change.org petition to urge Facebook to accept the ad.

And thankfully, Beiber is back on duty.

“It’s been a long hurdle,” Bieber said. “All I could focus on this entire time is getting back to work, returning to a normal life and that’s been my primary focus, mentally, physically.”

In other news...
A Legacy of Terror
Report: UNRWA Staff Inciting to Violence, Antisemit...
‘Batman’ Cartoonist Frank Miller Dropped From Comic...
WATCH: Kitten gets loose in Yankee Stadium, crowd C...
The Loss of the Libertarian Brand
Alarming Report: On the Verge of Civil War
0 Comments
Inline Feedbacks
View all comments