The Great Reset move against unvaccinated people is imminent [Video] 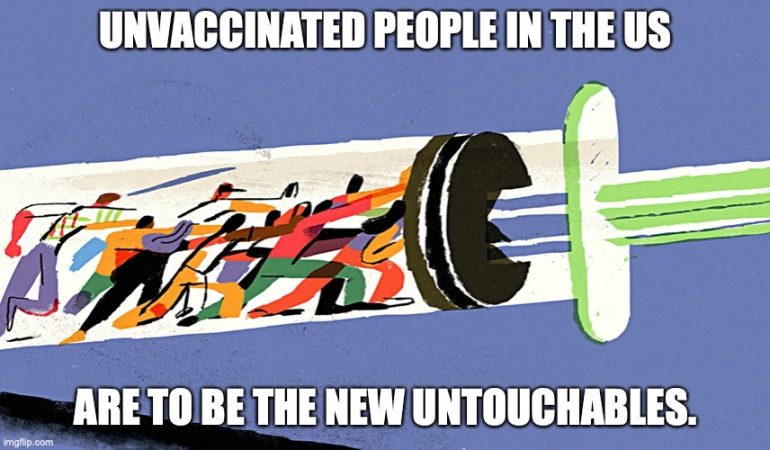 Watching any one news piece or video does not reveal what can be seen when multiple news articles and videos are seen. In one’s survey of the news available over the Internet, it is possible to detect various propaganda “waves”, narratives that are set to be propagated across the whole population. In Russia, I saw this coming with Delta several weeks in advance as cases began to climb. Then the slow admission that there was a problem, and then the propaganda pressure with prominent members in the Russian government or ministries saying that everyone must get vaccinated. All of this preceded our short-lived “Sobyacolypse”, in which dining was briefly restricted to those people who were either vaccinated against COVID-19 or who could show proof of being virus-free or having significant antibodies so as not to be a “threat” to safety.

This marked a major vaccination push in Russia that did admittedly help take the rate of vaccinated people in the country from about 12.4% to 16.11% as shown on Yandex.ru Thursday, July 29th. However, the Sobyacolypse rapidly fell apart. Delta did not show much longevity in Moscow, and the imminent elections in September began to inject the general unpopularity of these and the worker vaccination mandates, such that about a week or so ago, the mandates on restaurants were removed.

Now, the same thing is setting up in America. The Delta variant may well have already peaked in the United States, though it is still early to be sure about this pattern (it takes about two weeks to see a reliable pattern with the virus, in my observations). However, an early and significant spike in US COVID-19 cases rapidly fell off in succeeding days, as shown here:

However, the US government and many state governments and even businesses are going whole hog in their efforts to try to force people to get vaccinated, even though the vaccine seems unable to stop new COVID variants from “breaking through” and infecting people. The rather feeble response to this problem is the narrative “you will not get as sick if you are vaccinated and get COVID again.”

Really? Where is the proof?

Today, White House Press Secretary Jen Psaki jumped on the “blame the unvaccinated” bandwagon, and the Centers for Disease Control (the CDC) gave the nation guidance that suggested everyone must start wearing masks again, vaccinated or not.

We want Americans to be aware of this, that this is coming, or even here, and to be able to stand against it. While I am not specifically AGAINST anyone else vaccinated, I do have my own reasons why I am refusing it, and I will continue to refuse it until my questions are answered honestly and believably, something which is getting more and more difficult to do each day the dishonest narratives keep getting propagated instead of somebody telling the world the truth about this virus on an official level.

If Delta’s swing through the US is anything like what we appear to be seeing in Russia, the wave will not last very long – probably a month or six weeks, and possibly even less. In that time the pressure on people choosing not to get the shots is going to go up exponentially. Be true, folks. Do not settle for pressure or half-answers. Insist on the truth and stand your ground.

After all, this is not about public health.

It is about government seizing control. In fact, this vaccination push is very likely a deliberate part of the Great Reset plan to try and dominate people’s lives for whatever purpose. This seems to have failed in Russia, and it needs to fail in the United States. The virus is not so bad that we need to become subservient to national and local governments for no good reason. We deserve to know what we are really up against, no matter how bad that actual news might be.

An example of the pressure itself from CNN:

Hold on tight, free America. They are coming for you. Stand.