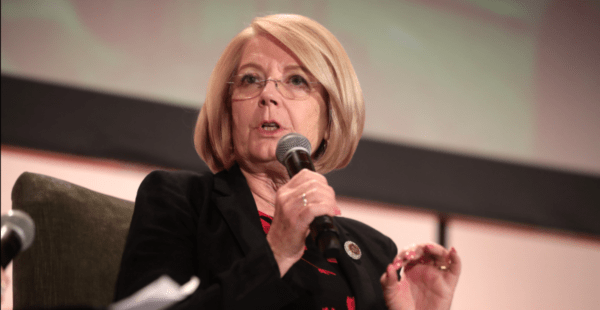 Arizona Senate President Karen Fann has explained the path to issue warrants to the Maricopa County Board of Supervisors, and how to launch decertification of the 2020 election results.

Speaking to JT Harris on Conservative Circus, Fann expressed her frustration at Arizona State Senator Paul Boyer, who has “gone over to the dark side” and blocked efforts from the Senate to hold the Maricopa Board of Supervisors in contempt by voting against a resolution to do so. Fann seemingly agreed with President Trump’s assessment of the situation, who last week slammed Boyer for “doing everything in his power to hold up the damning Forensic Audit of Maricopa County which has been taking place over the last 90 days, saying he has been “nothing but trouble.”

Without Boyer’s vote for the resolution of contempt in the 16-14 split Senate, it is practically impossible for Fann to be able to issue warrants to the Maricopa Board of Supervisors, something she described as being “extremely frustrating.” If at any point those warrants were able to be issued, then the Board of Supervisors could be compelled to answer questions to the Senate, or immediately bring certain material. Without those warrants, the Senate can still issue subpoenas and hold hearings including testimony from people who may have seen “shenanigans” taking place in the election.

Fann also laid out the path to the decertification of the 2020 election results. She confirmed that she had no power to be decertify the election herself, and that any such move could only take place after a court had verified the results of the audit if they proved that the numbers from the election were incorrect. A simple majority vote in the House and Senate would then take place with a resolution to decertify, and it would be handed over to the state’s Attorney General to proceed from there.

She proceeded to highlight the problematic response from Maricopa County to the demands for routers used in the election, as they first claimed they could not hand them over for security reasons, and then said they didn’t use any at all. “We’ve gone full circle with them on that one,” Fann noted. Secretary of State Katie Hobbs had claimed that the voting machines couldn’t be used again in Maricopa because they couldn’t certify that the auditors hadn’t tampered with them. “Well if that’s the case, then how did the company certify the machines to begin with before the election?” she pointed out.

Fann further slammed the “liberal media” for “not reporting both sides” of the audit, claiming they are simply engaging in “spinning” their own narrative, rather than being interested in the truth. “We haven’t proven [fraud] yet,” Fann said, “[but] what we do know right now is that two and two is not adding up to four,” adding that Maricopa County would rather “play games via their Twitter account and try and cover up or make excuses for all the things that we found,” rather than work together to fix the situation. “I have to ask, what are they afraid of?” she queried.