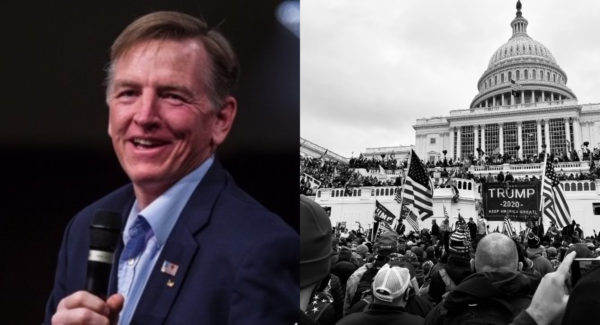 Congressman Paul Gosar (R-AZ) recently issued a letter to Biden Administration Attorney General Merrick Garland demanding the release of 14,000 hours of footage from January 6 that the Department of Justice possesses, as well as demanding answers on the torturous conditions in which the detainees are being held. The letter was signed by Reps. Louie Gohmert, Matt Gaetz, and Marjorie Taylor Green. They will all be holding a press conference tomorrow outside the Justice Department demanding answers about the treatment of Jan. 6th prisoners.

As new videos from January 6 continue to emerge following plea deals and extensive prison sentences for Capitol detainees, Congressman Paul Gosar has suggested that the Justice Department is hiding video footage that could potentially exonerate some of those accused of crimes on that day. “The DOJ is obligated to release all the evidence that could exonerate or explain who did what,” tweeted Congressman Gosar.

@DrPaulGosar is what voters are looking for in leadership roles in the GOP. He’s got the balls to speak the truth about the stolen election and fake insurrection. Bravo

After issuing a letter to Attorney General Merrick Garland demanding the release of 14,000 hours of footage from January 6, as well as answers on reports of detainees being tortured, a press conference held by Reps. Gosar, Matt Gaetz, Louie Gohmert, and Marjorie Taylor Greene has been set for tomorrow. The press conference, dubbed “Demanding Answers on Treatment of January 6th Prisoners,” will be held at 1 p.m. outside of the Department of Justice. The four representatives be “demanding answers from Attorney General (AG) Merrick Garland on the status of January 6th prisoners and related investigations.”

“The undersigned offices in one form or another have been requesting the release of all 14,000 hours of raw footage from surveillance cameras. This is a matter of extreme public importance,” notes Gosar, before adding that “Several defendants have already made plea agreements, yet it does not appear that either they, or their counsel, have had access to this potentially exculpatory evidence.”

Many videos captured on January 6 show Capitol Hill police allowing protesters into the building, and even sanctioning their behavior so long as it remained peaceful. It seems logical to many that the 14,000 hours of surveillance video held by the Department of Justice may prove this incontrovertibly. “Every American citizen has a constitutional right to all the evidence before making any decision to go to trial,” Gosar notes, yet adds, “In our oversight capacity over the DOJ, we have asked multiple times for information only to have our inquiries ignored.”

Amid reports of January 6 detainees being subject to torturous inhumane abuse including beatings, solitary confinement, and COVID-19 vaccination coercion in the D.C. Detention Center, audio released by American Greatness reveals the prisoners singing the Star-Spangled Banner in order to lift spirits and boost morale while they await their trials, as National File reported.

In other news...
EXCLUSIVE: Paul Gosar Tells National File Whitmer K...
Pro-BLM Ex-Senator Barbara Boxer Reportedly Assault...
Coach Who Was Fired for Kneeling to Pray on Field D...
Sean Penn refuses to work on TV show until all cast...
Durham Report Likely to Be Made Public: Justice Off...
Lori Lightfoot Doubles Down On Her Hatred for Cauca...
0 Comments
Inline Feedbacks
View all comments