VIDEO: Tucker Laughs At Liberal Harassing Him And Yelling ‘I Don’t Care That Your Daughter’s Here’ In Montana Store 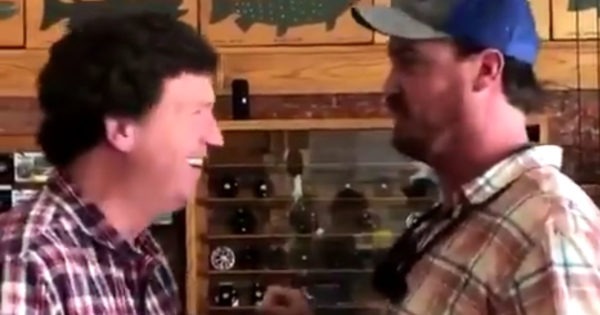 An angry liberal activist uploaded footage of himself harassing Fox News host Tucker Carlson inside a Montana fly fishing store, yelling “You are the worst human being known to mankind. I want you to know that’ and “I don’t care that your daughter’s here!” To his credit, Carlson handled the cringeworthy situation with remarkable poise, simply laughing off the harasser as the latter became more and more agitated.

The incident occurred inside a fly fishing store in Livingston, Montana this week. A man named Dan Bailey posted the footage to Instagram with the caption, “It’s not everyday you get to tell someone they are the worst person in the world and really mean it! What an asshole! This man has killed more people with vaccine misinformation, he has supported extreme racism, he is a fascist and does more to rip this country apart than anyone that calls themselves an American.” Bailey also tagged the Rachel Maddow show in the caption.

In the video, Bailey can be seen aggressively thrusting his finger and paunch into Carlson’s personal space while following him around the store and saying things like, “You are the worst human being known to mankind. I want you to know that. What you have done to this state, to the United States, to everything else in this world. I don’t care that your daughter’s here! What you have done to people’s families, what you have done to everybody else -”

Carlson laughs and smiles at the harasser, says “I appreciate that,” and resumes his shopping inside the store while Bailey follows him around and continues to sound increasingly outraged.

Being confronted in public is nit a new experience for Carlson. In 2013, a member of the Howard Stern “Wack Pack” initiated and held a conversation with Carlson about fly fishing in Central Park that, while starting off tense, ended on amicable terms.