On The Subject Of Guns, Democrats Can’t Distinguish The Difference Between A Gun In The Home, And Guns On The Street 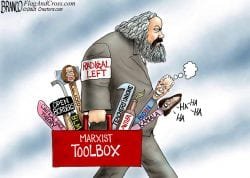 All leftists want to eliminate opposition to their impractical and unworkable leftist ideas, and when it comes to a democratic society and the subject of guns, leftists are unable to determine the difference between honest people keeping guns in the home for protection, and guns on the street being used to commit crimes. To leftists, and this includes all fascist and Communist nations, as well as America’s Democrat party, any weapon is a threat to them and their violent political initiatives, and must be removed from private hands, even if the owner has never committed a crime, is not a suspect to a criminal event and has a unblemished record of always being lawful and honest.

Democrats get so wrapped up in their accusatory, far-left declarations that common sense and good judgment completely escape them. Terms like “white privilege“, “racist” and their proclaimed murderous nature of inanimate guns, are just boiler plate talking terms and have no real meaning to these fools.

A gun in an honest citizen’s home isn’t a threat to anyone except a criminal who wants to practice his illegal trade on that citizen‘s property. But a gun on the street in the hands of a criminal, most of whom are allies of Democrats, is a threat to everyone’s welfare.

Joey’s plan is still to send federal officers of some type to the homes of Americans and confiscate their guns, like officials did during the New Orleans flooding a few years ago. All dictators must protect themselves by getting guns out of the hands of citizens, because all dictators are evil, violent people, just like Joey’s administration. Citizens of the United States possessing guns is no threat to the occupant of the White House, but the occupant of the White House can certainly be a threat to the peace and prosperity of the citizens of this nation. All that the left’s holier-than-thou posturing does is allow more empty , nice sounding rhetoric to be expressed to vilify private gun possession, while nothing gets done to protect citizens.

Of course, Democrat mayors and governors across the nation refuse to fully enforce gun laws against criminals who use guns in the commission of a crime, while self-righteously pretending to get tough on illegal gun use by seeking increasingly harsh anti-gun laws, which they will still not enforce as gun crimes increase.

But when it comes to peace-loving, law-abiding, tax-paying Americans who have a gun in their homes for self-defense, Joey and his Democrat mayors and governors, all of whom are soft on crime, are threatening to send out troops to forcibly remove the homeowner’s guns, or go to jail.

Or maybe the political left of Joey Biden actually does know the difference between peaceful citizens who present a threat to no one, and criminals who are not punished for their crimes, and have come to the conclusion that a high crime rate and the chaos, confusion and misery that situation causes, is good for their position of power and their ability to rule outside the constitution, as Saul Alinsky proclaimed years ago with his Rules for Radicals, and they prefer to go with their power grab and to hell with the suffering of Americans as our constitution is ignored, our freedoms are eliminated and leftist induced crime skyrockets.

On The Subject Of Guns, Democrats Can’t Distinguish The Difference Between A Gun In The Home, And Guns On The Street is original content from Conservative Daily News – Where Americans go for news, current events and commentary they can trust – Conservative News Website for U.S. News, Political Cartoons and more.

Click this link for the original source of this article.
Author: Dave King