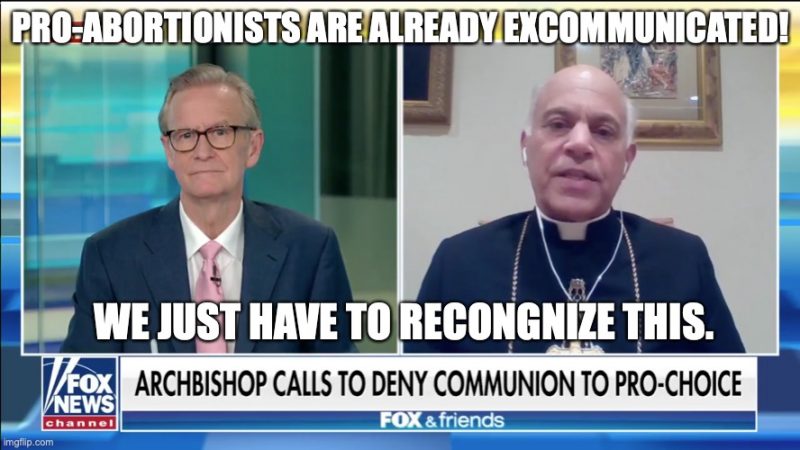 A few weeks ago, we reported that Pope Francis essentially “disinvited” Imposter Joe Biden, canceling a Mass that he was supposed to attend at the Vatican. This was because at the same time, the US Conference of Catholic Bishops was in Rome, deliberating on whether or not to establish a new “Eucharistic Coherence” policy set, which would include denying Holy Communion to people in leadership positions who are Roman Catholic, but whose beliefs and policy views violate the beliefs of the Roman Catholic Church.

On July 20th, 2021, Emma Colton of Fox News reported that a New Mexico state senator was denied Communion due to his support for a pro-abortion bill.

Could this be the first shot in the battle for Eucharistic Coherence? It appears that way. Emma writes:

A New Mexico state senator said he was denied receiving Holy Communion at his Catholic church due to his support for a pro-abortion bill.

“I was denied communion last night by the Catholic bishop here in Las Cruces and based on my political office. My new parish priest has indicated he will do the same after the last was run off. Please pray for church authorities as Catholicism transitions under Pope Francis,” Las Cruces state Sen. Joe Cervantes tweeted on Saturday.

He explained on Monday that he was denied receiving communion due to him voting in favor of a pro-abortion bill that was signed into law and repealed a 1969 state law criminalizing abortions.

“Since voting to eliminate an unconstitutional and never used New Mexico law, which would imprison women for abortion, some new clergy have decided I am unwelcome at their communion,” he said in a statement Monday.

“While I ordinarily prefer to practice my faith privately with my family, I felt it necessary to address those who would politicize, and thereby belittle, the promises of the Eucharist.”

State Senator Joe Cervantes expressed reveal his disdain for the religion he supposedly belongs to in saying “please pray for church authorities as Catholicism transitions under Pope Francis.”

Transitions? From what to what? Sen. Cervantes is certainly one of many Roman Catholic Church members who do not follow or agree with what their confession teaches. This has yielded some major problems as staunchly pro-abortion (anytime, anywhere, any reason) political leaders like Nancy Pelosi and Joe Biden, who are excommunicatus by definition due to their actions are nevertheless give Holy Communion, in direct violation of Church doctrine and canons.

This is changing, as the US Conference of Catholic Bishops voted overwhelmingly to draft a formal document on the meaning of the Eucharist (emphasis added):

More than 73% of the U.S. bishops casting ballots at a virtual conference this week supported tasking the USCCB’s doctrine committee to draft language on maintaining consistency with the Eucharist. A section of the document is expected to include a specific admonition to Catholic politicians and other public figures who disobey church teaching on abortion and other core doctrinal issues.

Up next, at least two-thirds of the bishops would have to vote to adopt the new language at their next gathering slated for November. The decision on whether Biden should be allowed to receive Communion would still be left up to individual bishops, as is standard for all churchgoers, but a new document would inform those decisions.

Now, it appears that an emboldened American exarchate of the Roman Catholic Church is putting its money where its mouth is.

For decades, the Roman Catholic Church has nurtured a curious relationship with the American Democrat Party. The Church looked at the Party’s increasing leftist stance and in it saw a way to perhaps impose certain ideals and practices for the Roman Catholic as part of what the Democrat Party was standing for in its progressive ideologies. Wealth redistribution was seen as “charity”, for example. Universal Health Care was seen as “loving your neighbor and caring for him”, and so on, but the Church was amazingly deaf and blind when the Democrat Party became the party of abortionists and weirder and weirder definitions of family, as well as support of same-sex “marriage” and many other abhorrently anti-Christian ideas and practices. Nevertheless, the Church continued to support Democrats, because for many of the leaders, what the Democrats were doing was what the Church wanted.

Now, finally, it seems that the delusion is lifting. One could hope so, but it will be a great fight, particularly if we start seeing situations where people like Imposter Biden and Nancy Pelosi get denied Holy Communion.

One takeaway of this is that the Church has wrongly professed “unity” as its aspiration. But the Church in saying this leaves a few very important words out of the hoped for status. It ought to be “United in Obedience to Christ”, but that is a far different matter than “Unity” by itseld.

Unity is singing Kumbaya around a campfire, maybe with a heavy cloud of cannabis smoke hanging over everyone’s heads.

Being united in obedience to Christ is to be a Christian soldier, fighting for the Kingdom of God and one’s own personal salvation first and foremost. It is war that will never end until the End of all things.

One is very comfortable, and one is right. It is good to see the Roman Church taking this move in the United States. Hopefully there will be more.