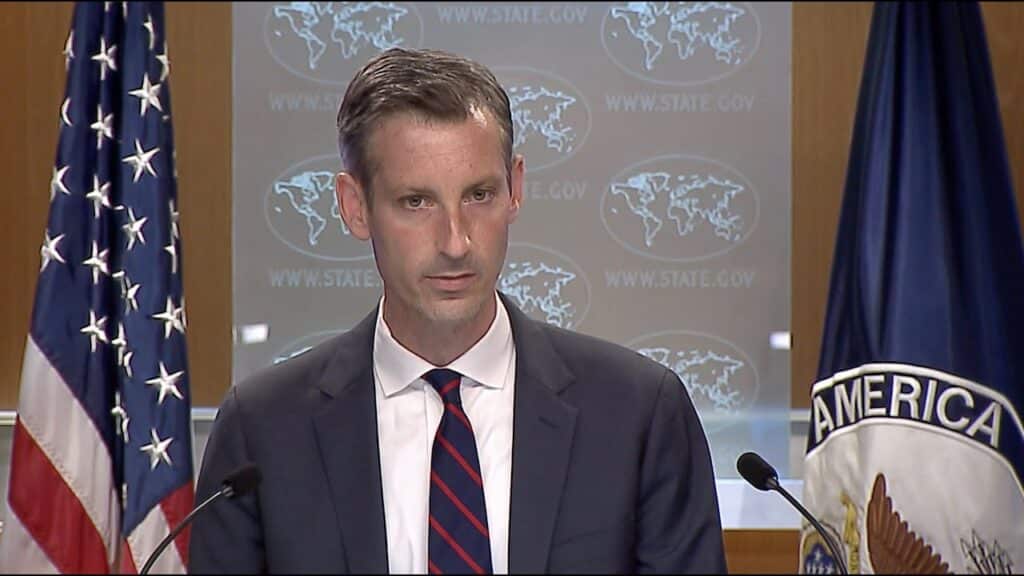 “You guys have reached an agreement with the Germans on Nord Stream 2, and so I’m wondering if you – recognizing their – that this joint statement that she talked about hasn’t come out, yet … I’m just wondering if there’s any more you can add to what she said ahead of the release of that statement,” Lee said.

“And yet you’re prepared to allow it to go ahead without trying to stop it, even at this late hour?” Lee asked.

“We have consistently applied sanctions and examined potentially sanctionable activity, and acted on that,” Price replied. “And of course, we have in May imposed sanctions on 19 entities and vessels, and at the same time – as you’ve heard from the secretary, as you’ve heard from the president – we have come to the conclusion, as any rational observer would, that sanctions are unlikely to stop, to stand in the way of the completion of the pipeline, to prevent the pipeline’s construction. And so, that is why this administration determined that it was not in our interest to significantly undermine, to weaken our bilateral relationship, our ally, the relationship we have with our ally, Germany…”

Price later added that while the administration considering the pipeline a universally bad idea, “I can say is that we have looked at this issue very closely. We examined a range of options, a range of tools at our disposal. We came to the conclusion that for a pipeline that was 90 – more than 90 percent complete, on the day this administration assumed office, to potentially undermine our relationship with Germany, and to send a signal to our allies and to our partners the world over that the United States is willing to throw asunder important relationships, that’s not something that we were eager to do, certainly.

“We also know that perhaps now more than ever we need our allies, we need our partners, across a range of challenges to confront a host of threats. And in this briefing room, we’ve discussed our cooperation with Germany on any number of fronts, from the PRC, to Afghanistan, to the climate crisis, to the shared values that we have more broadly,” Price continued. “I will also say that even as we came to this conclusion and going forward, we have shown that we are going to always follow the law. We enacted sanctions, as I said, in May on 19 entities and vessels. That is in contrast to two sanctions that were levied by the previous administration under which more than 90 percent of this pipeline was completed.”