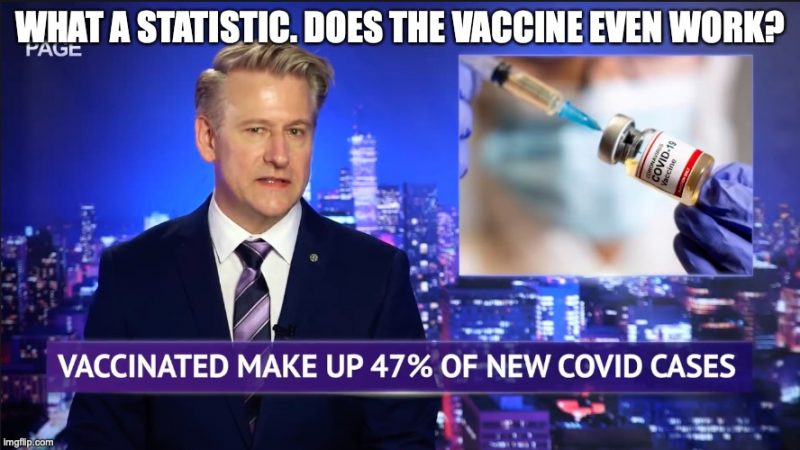 A new British study on the behavior of SARS-CoV-2 among vaccinated populations revealed that 47% of all new cases being reported are among people who have been fully vaccinated against the disease. This was reported by a new and very well-presented news source called Front Page with Scott Goulet. We offer his video presentation. The relevant report begins at [08:38] in the video. We attempted to copy the time as part of the URL here, but if it does not work, go to this time to start this presentation.

(As an aside, the reporting in this whole segment is very well done and the whole video is very much worth watching.)

Scott notes that Imposter Evil Grandpa Joe Biden (well, I added some nicknames here, but…) stated that the only spread of the virus is among those people who are not vaccinated. However, this British study says something very different, and we quote this report from Business Insider:

Almost half of COVID-19 cases in the UK are among people who are partly or fully vaccinated people, according to data from a large study.

The finding came from the ZOE COVID Study run by King’s College London. It uses information logged daily by over a million people to predict COVID-19 trends

As of July 15, an estimated 17,581 new daily UK cases of COVID-19 were in unvaccinated people, the study authors said in a press release on Thursday.

That compares to an estimated 15,537 new COVID-19 cases in people who had at least one dose of the vaccine, which is about 47% of all cases.

“That’s probably because the virus is just running out of people to infect who haven’t already been exposed and don’t have natural immune unity in those groups [unvaccinated people],”  Prof Tim Spector, an epidemiologist from King’s College London, said in a video accompanying the press release.

Spector is the lead author of the ZOE COVID Study.

COVID-19 is spreading more quickly in those who have received only one dose of vaccines, as can be seen in the graph below from ZOE’s data:

In an email to Insider, Spector said: “Our research showed fewer, milder symptoms were reported in vaccinated people compared to unvaccinated adults who had contracted the virus.”

The report does admittedly try to promote vaccination, but the statistic it states next is very interesting. This shows a little later in the same report:

Hospitalization rates in the UK have risen slightly, with 3,615 new COVID patients in the hospital as of July 14, compared to about 900 in May.

Cases continue to rise driven by the Delta variant. “It is my belief that as more people in the UK receive their second vaccination, hospitalizations will stabilize and likely fall,” Spector told Insider in an email.

Overall, reports like this are trying to be used to force or promote vaccination, but this one also reveals a strange question:

After all, 47% is about half of the new cases. What would be even more interesting to know is what the ratio of unvaccinated to vaccinated people is in Great Britain, where this research was conducted. According to Yandex.ru, Britain reports that 57.36% of its population is fully vaccinated. This is higher than the US rate of 49.87% (which has been very slow to increase in recent weeks), and it is far higher than the whopping 14.69% rate in Russia, where despite a massive push in some regions spurred by the Delta variant, the vaccination rate increased by only about two percentage points since the surge in Delta cases began, and now new case counts are about one-third what they were at the peak, at least in Moscow.

So, the majority of the British populace is vaccinated, and this group is accounting for nearly half the new cases in the country.

How is this possible if they are vaccinated?

There are a few possible answers that span the spectrum from the mundane to the alarming.

The most mundane possibility is that the vaccines actually deliver a sort of “injured” form of COVID to the recipient. We covered in an earlier article how the corporate mandate policy in Russia resulted in my student getting his first shot and being flat on his back by the end of the day with 102 degree temperature and feeling like he had two Empire State Buildings sitting on his chest.

He got better, and by the next day he was fine, but, speculatively speaking, might it be possible that the virus vaccine weakens its recipient a bit and makes him or her more susceptible to the real thing?

After all, if you are down a bit, it is easier to keep you down with a lesser blow.

The other end of the speculation on this is that the vaccines simply do not work against the mutations of the virus. That in turn leads to speculation we have often discussed: that according to the stories of the bioengineering work on chimeric coronaviruses in China, one of the characteristics of these franken-beasts is that they cannot be defeated by the normal course of antigen-producing antiviral treatments. This would make COVID-19 very similar to the seasonal surges of the common influenza, which also slowly mutates from year to year. Flu shots are called vaccines, but this terminology is rather loose when compared against traditional vaccines against illnesses like measles, mumps and rubella, in which a course of vaccinations usually protects the person for his or her entire life. Flu shots may be expected to provide protection against the dominant strain of influenza for one season and one season alone.

Perhaps this is what we are seeing – that the unique (and artifically created) characteristics of the SARS-CoV-2 virus are such that vaccines – as they presently exist – cannot stop it.

This scenario does, unfortunately, appear to fit the developing “guidance” that arose in recent weeks, suggesting that people be vaccinated every six months (not even a full year). The skill required to deliver this message without setting off riots all over the world is considerable, and it still did not work in France, where huge riots erupted after Presisent Emanuel Macron tried to mandate vaccination for his country’s population.

Another bit of pure speculation is in the Business Insider piece and I want to reflect on that again here. This thought was expressed by Professor Tim Spector:

“That’s probably because the virus is just running out of people to infect who haven’t already been exposed and don’t have natural immune unity in those groups [unvaccinated people],”  Prof Tim Spector, an epidemiologist from King’s College London, said in a video accompanying the press release.

This statement appears to be nonsensical. The virus is running out of people to infect, so it is turning its attention toward vaccinated and partly vaccinated people? That seems difficult to believe. Common sense might indicate that the virus penetration increases as restrictions decrease, but this idea, too, has been put to the test and some studies suggested that self-isolation regimes increased the likelihood of COVID-19 transmission.

In other words, we still do not really know what is going on with this virus, which further appears to support the idea that this virus is not behaving the way a naturally occurring one would under the same conditions.

The comments offered by Professor Spector are perhaps a little more intellectually honest than many COVID video presenters are. His recommendations actually are fairly common-sense (be out in open, well-ventilated areas), keep good personal hygiene and similar ideas, and some are expressing allegiance to the Mask god and get vaccinated. He is not fanatical about any aspect of this, however, so this is tolerable rhetoric. Incidentally, Professor Spector has a number of videos on COVID 19 topics that are probably intellectually honest enough to watch and consider without worry of being called “stupid” for disagreeing.