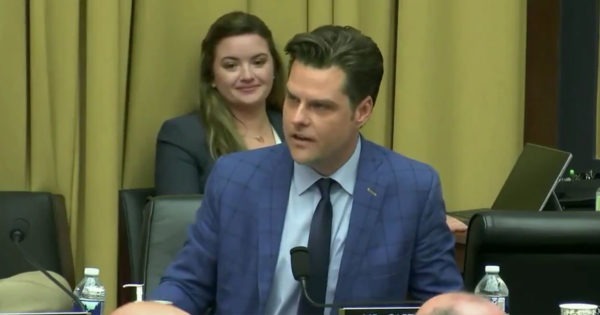 Rep. Matt Gaetz (R-GA) revealed on Thursday that he is on team #FreeBritney, and called for a congressional investigation into the conservatorship of pop music star Britney Spears, whose legal battles against the restrictive court-ordered conservatorship have made headlines in recent weeks.

“So much of our discussion over the past couple days has been on control and manipulation, and so I’ll just share this observation,” Gaetz said on Thursday. “I do believe the nation was quite taken with the control that the guardianship and conservatorship process has on far too many Americans, I am glad Britney Spears got to speak out on this issue finally yesterday, and I would reiterate the call that ranking member Jordan and I have made to Chairman Nadler to allow us to hold hearings on conservatorship and guardianship and abuse, and I think the very first witness before the judiciary committee should be Britney Spears. Free Britney, I yield back.”

During a court hearing on Wednesday, Britney Spears spoke out about many of the issues she has faced during the conservatorship, including being forced to take birth control and lithium against her will.

“Lithium is a very, very strong [medication] and completely different medication than what I’ve been on,” Spears said. “You can go mentally impaired if you take too much, stay on it longer than five months, I felt drunk. I couldn’t even stick up for myself. I couldn’t even have a conversation with my mom or dad about anything. I told them I was scared and they had six different nurses come to my home to monitor me while I was on this medication that I didn’t want to be on to begin with.”

Spears continued, “I was told right now in the conservatorship, I’m not able to get married or have a baby. I have an I[U]D inside of myself right now so I don’t get pregnant. I wanted to take the IUD out so I could start trying to have another baby, but this so-called team won’t let me go to the doctor to take it out because they don’t want me to have children, any more children.”