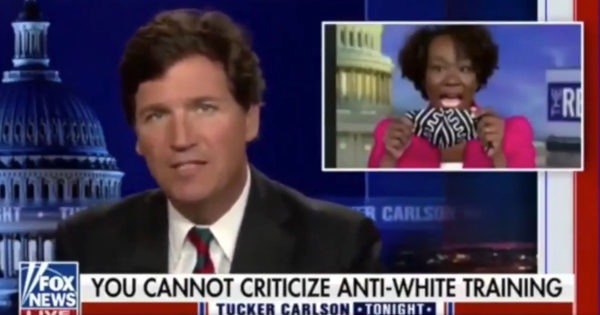 During Tuesday night’s edition of the Fox News television program “Tucker Carlson Tonight,” host Tucker Carlson reminded viewers that the teaching of Critical Race Theory in schools and businesses is a direct expression of anti-White racism, not a vague and amorphous form of generic racism that actually hurts black or Asian communities the most.

“So Chris Rufo is a researcher & he dared to expose Critical Race Theory for what it is, it’s Anti-White Racism, obviously,” Carlson said Tuesday while introducing a segment with an ant-CRT advocate. Carlson added, anti

Tucker: “Chris Rufo is a researcher & he dared to expose Critical Race Theory for what it is, it’s Anti-White Racism.” pic.twitter.com/F4mmma5ge0

“Everyone is created equal in the eyes of God,” Carlson continued, “and if you don’t act that way, and judge people based on who they are and what they do. and the choices they make, and instead judge them based on the color of their skin, it’s over. That’s very obvious, and it’s been obvious to people for a long time. In fact, it was universally acknowledged until about twenty minutes ago. But the Washington Post- owned by Jeff Bezos, The New York Times, and a few other big outlets like CNN and NBC, are leading the charge in the other direction.”

One such activist, a Karlyn Borsenko who claims to have “broke” beverage manufacturing company Coca-Cola, made such statements on Twitter as “Maybe Joe Biden is right when he says white supremacy is the biggest threat,” and then tried to initiate an act of cancel culture deplatforming against journalist Cassandra Fairbanks.

Carlson’s remarks about CRT on Tuesday appear to be carefully chosen to rebuke self-described anti-CRT activists who have been spreading the false narrative that CRT isn’t anti-White.