A CBS reporter at an affiliate in Detroit has been terminated after alleging – publicly – that the network is rife with corruption.

A video from Project Veritas with April Moss, formerly of CBS in Detroit, gives her the opportunity to explain her concerns:

Moss said she ran into repeated trouble, not only with pressure from her corporation to be vaccinated, a move to which she objected, but also in the presentation of the news.

While Moss is a meteorologist, she also created a number of news segments for her station.

She recalled interviewing an expert of COVID and vaccinations that was in a position of authority, who had insisted side effects were essentially nominal – even though federal statistics now show some 5,400 people have died in the U.S. after getting the vaccination.

She said she was asking followup questions of the expert to allow an explanation for the impact of the vaccinations, and the side effects, and a producer was telling her in her earpiece to “move on” to the next line of questioning.

Moss said she later was interrogated about why she was asking the expert to provide information.

It was “almost like I was not allowed to ask real questions,” she explained. 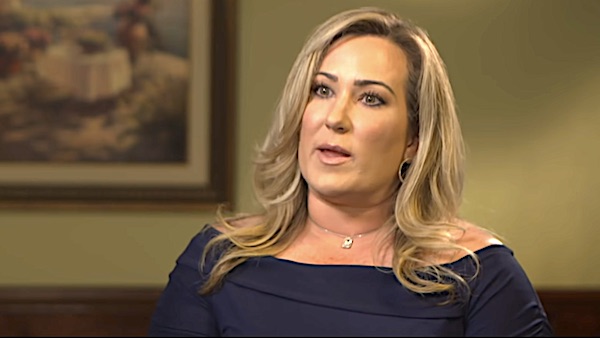 She also noted she was interviewing Gayle King, from the national CBS office, who opined to her that references to “fake news” would not apply to CBS.

However, Project Veritas earlier had documented a Michigan report in which participants explained that CBS staged having a number of people waiting for a COVID test. One of the participants in the clinic confirmed they had not been told they would be doing “fake patients.”

Moss said, “I’m watching my country disintegrate and if I don’t stand up and do something when I’m able to, I just don’t know that I could live with myself … No longer is true journalism being executed anymore … It is one of the greatest crimes really in history right now.

“Because if we are shaping the American public’s mind, then we need to be seeking truth.”

It was President Trump, during his term in the White House, who was openly at war with many reporters and networks, calling them “fake news.”

In fact, virtually all of the legacy media participated in the promotion of the now-debunked claims of “Russia collusion” in his 2016 campaign, which was used as the basis for repeated attacks by the media on his presidency. The facts are that the claims had been fabricated.

Project Veritas reported Moss was fired from the station, which issued a statement that her claims are “false” and she was “no longer with our station.”

“Moss, a wife and mother of four, has worked at CBS 62 for almost a decade and said the corporate arm in New York has been driving decision-making without regard for journalistic ethics, or general concern for the public’s right to be informed,” Project Veritas confirmed.

She said the station was pressuring employees who opted not to get the vaccine into changing their minds through company-wide messages and emails. She called it a “human rights issue.”

She charged that the network was legitimizing the COVID-19 vaccine.

At one point during the interview with Project Veritas founder James O’Keefe, she referred to CBS’ news practices as “propaganda being pushed on people” and said acts of discrimination have taken place with the station “segregating coworkers” based on health assumptions.

“Her story also seemingly included echoes of a past Facebook release from Project Veritas in which the term ‘Vaccine Hesitancy’ was unveiled. This exact phrasing was found within internal communications from CBS corporate which were also provided by Moss,” the report said.

According to Project Veritas, “Despite Moss’ career uncertainty — and the stress surrounding her actions — she said her family has been fully supportive and she places her trust in God to carry them through, come what may.”

“You know what, we put our faith and hope and trust in God. That’s what we do,” she said.

It’s the second such breakout by a reporter from network duties.

Previously, a reporter for a local Fox affiliate confirmed she was threatened for posting online reports about hydroxychloroquine, a drug that studies have shown to help in the fight against COVID-19.

Then she was suspended for releasing those details.

“Fox came at my throat for standing up against censorship,” confirmed Ivory Hecker, a reporter for Fox 26 in Houston. 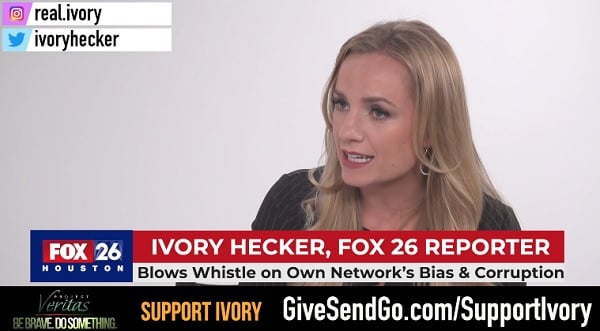 Her charges came in a report from Project Veritas, as well as in a video posted online by the organization.

The report said Hecker was suspended after announcing live on-air she was in contact with Project Veritas for what she called “corruption” at the Houston affiliate.

“She said the station’s actions are an affront to real journalism and claimed leadership prioritizes corporate interests over the viewer,” the report explained. “Hecker obtained recordings of her superiors telling her to prioritize the opinion of the station’s general manager, and the company’s CEO, above that of the audience.”

“What’s happening within Fox Corp is an operation of prioritizing corporate interests above the viewer’s interest and, therefore, operating in a deceptive way,” she said.

Studies show that hydroxychloroquine actually can help in the treatment of COVID-19 patients. Nevertheless federal health officials as well as legacy media outlets and social media megacorporations have consistently tried to suppress those details.

The video is here.

Hecker said, “Vaccines are a potential money maker for Fox. Fox gets paid for that. As a viewer you need to look at who is advertising on this TV station, and you’ve got to realize — surely that the TV station doesn’t want to hurt its advertisers.”