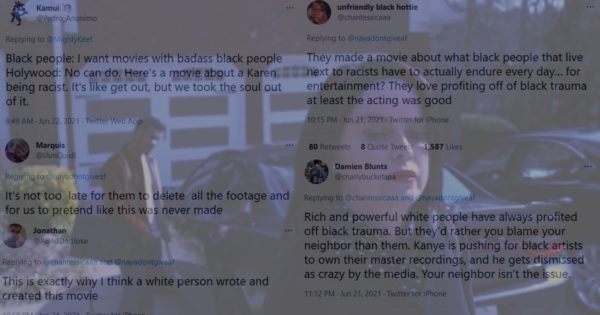 An upcoming liberal “horror” film that attempts to capitalize on ancient internet memes about fictional white women named “Karen” who call the police on black people has received intense criticism and mockery from the black community for being a “Get Out” ripoff that amounts to nothing more than an incredibly cringe blaxploitation flick.

In the trailer for “Karen,” the titular character is seen engaging in deeply depraved and bigoted behaviors, such as committing “microaggressions,” informing neighbors where to leave their trash cans after pickup, and owning a Confederate flag soap dispenser. Her victims  – an upper-middle class heterosexual black couple who are smarter and better looking than Karen – tremble in horror as she asks them to lower their conversation volume in restaurants.

The culmination of the movie appears to involve “Karen” calling the police on black people, and chasing them around with a gun while spouting off goofy one-liners such as “bad things happen to people that don’t comply.” The mandatory Hollywood trope of the white female “Karen” character secretly being sexually infatuated with a black male character also appears to figure heavily into the plot, as do racist police officers with stereotypical Southern accents.

Actor Taryn Manning spoke highly of her role as “Karen,” declaring that she felt a “social responsibility” to “play the villain to affect change around the globe.” Manning added, “What’s been going on is devastating. It’s time for change and for me to be a part of the bigger picture, meant a lot to me.”

Unfortunately for the makers of “Karen,” the film appears to have fallen flat with its intended audience before even being released. Black Lives Matter supporters have accused the film of exploiting “black trauma,” and have mocked it for being a derivative of the film “Get Out,” which also focused on evil white racists obsessed with black people.

Naturally, the film has also drawn scorn from normal moviegoers for its laughable liberal premise and storyline. The trailer has received a massive dislike-to-like ratio of nearly two to one, and this author could not find a single positive opinion on the film after scrolling for some time in the trailer’s comments section.

The failure of “Karen” to find a sympathetic audience is not an aberration, as other similar films such as “Cuck” and “The Columnist” have bombed with audiences in recent years.