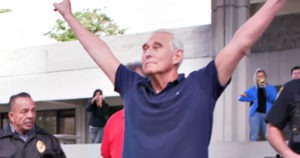 Roger Stone has issued a response after a writer for the Los Angeles Times claimed that he is being investigated for criminal activity regarding January 6, saying that “there’s nothing to investigate”.

“At a minimum, DOJ wants to leave no Stone (so to speak) unturned re 1/6,” wrote Litman on Twitter. He then claimed that radio and TV host Alex Jones and Stone could be “culpable” and subject to “conspiracy” charges due to the peaceful rallies they helped organize and spoke at on January 5 and January 6. (READ MORE: Roger Stone Slams ‘Baseless Smears’ From Media Attempting To Tie Him To January 6, ‘It’s A Vile Lie’)

At a minimum, DOJ wants to leave no Stone (so to speak) unturned re 1/6. But also–they have charged a conspiracy among at least 9. anyone who agreed to unlawful end and did an overt act is culpable.That might mean Stone, Jones, more. Discussing with @ZerlinaMaxwell at 7:15 ET

Having been banned on Twitter for years, Stone responded on Gab, where he wrote, “Nothing whatsoever has changed since I made this video months ago. Some assh*le from the LA Times says I am being investigated regarding January 6. Good luck. There’s nothing to investigate,” and linked to an article written earlier this year. (READ MORE: Nydia Stone, Wife Of Roger Stone Diagnosed With Stage 3 Cancer)

The article linked by Stone contains a video, in which Stone said, “Let’s be very clear: any statement, insinuation, report, allegation, or even implication that I was involved in or knew anything whatsoever about the riot in the Capitol on January 6 is categorically false and any honest investigation will turn up no evidence or witnesses to the contrary.” When asked why media figures and elected officials have issued statements to the contrary, Stone said, “I think they’re very angry about [President Trump’s] pardon against me, it is essentially guilt by association.”