NYT Reporter Asks Tucker If He Got Vaxxed, Fox Host Retorts ‘When Was The Last Time You Had Sex With Your Wife,’ And ‘What Position’ 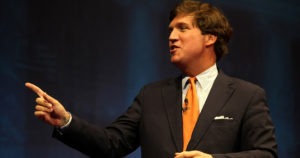 A New York Times reporter says that when he demanded to know if Fox News host Tucker Carlson has received any of the four controversial COVID-19 vaccines, Carson retorted by asking when the reporter last had sex with his spouse, and in “what position.”

In an article for the New York Times titled “Tucker Carlson Calls Journalists ‘Animals.’ He’s Also Their Best Source,” journalist Ben Smith covers Carlson-related topics of deep importance to corporate media, such as “whether he’s really a racist or whether he cynically plays one on TV.”

Many of the negative observations made about Carlson in the article have taken the backseat in garnering attention on social media, however, to a anecdote by Smith about a conversation he recently had with the Fox News personality via text message.

“Last month, I texted Tucker Carlson to ask him a question that was on my mind: ‘Did you get vaccinated?’ Smith writes. “‘When was the last time you had sex with your wife and in what position?’ Carlson replied. ‘We can trade intimate details.’” Smith says he then “argued back and forth” with Carlson the topic of COVID-19 vaccines.

Carlson recently made headlines for slamming a Republican National Committee ad that bizarrely attempted to cast President Joe Biden as an isolationist who is too nice Russia and President Vladimir Putin:

“The Democrat Party has spent the last four years in a McCarthyite froth over Russia, they told us that Russia, not China, was the real threat to the United States,” Carlson said. “Well that was absurd of course, it was absurd then, it’s absurd now, maybe even more so.”

Carlson continued, “The funny part is that over at the Republican National Committee, they believed it. How do we know? This is a real ad released by the RNC. Watch.” The host then played the ad, in which a narrator in a stereotypical Russian accent implies that Joe Biden should have imposed more sanctions on Russia, and that the U.S. should take some sort of military action in response to Russian interests in Crimea.