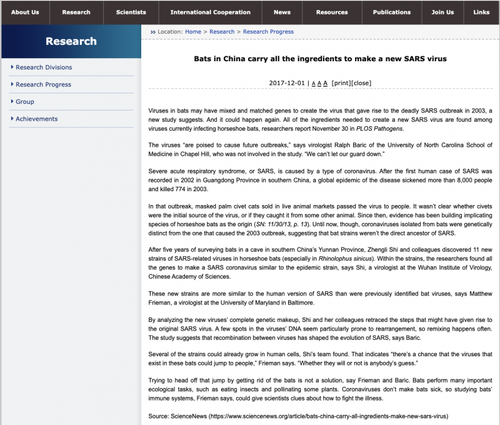 Yet another piece of the pandemic puzzle has fallen into place – after being hidden in plain sight until it was wiped from the Wuhan Institute of Virology’s (WIV) website.

Unearthed by The National Pulse‘s Natalie Winters, a Nov. 2017 report titled (no really): “Bats in China carry all the ingredients to make a new SARS virus,” describes how researchers at the WIV had identified ‘all the genes to make a SARS coronavirus similar to the epidemic strain,’ among 11 new strains of viruses collected in horseshoe bats.

“After five years of surveying bats in a cave in southern China’s Yunnan Province, Zhengli Shi and colleagues discovered 11 new strains of SARS-related viruses in horseshoe bats (especially in Rhinolophus sinicus). Within the strains, the researchers found all the genes to make a SARS coronavirus similar to the epidemic strain, says Shi, a virologist at the Wuhan Institute of Virology, Chinese Academy of Sciences.

These new strains are more similar to the human version of SARS than were previously identified bat viruses, says Matthew Frieman, a virologist at the University of Maryland in Baltimore. -PLOS Pathogens

More via The National Pulse:

The article, which was recently wiped from the Wuhan Institute of Virology’s website, also notes that Shi and her colleagues found that “several of the strains” could grow in human cells.

“By analyzing the new viruses’ complete genetic makeup, Shi and her colleagues retraced the steps that might have given rise to the original SARS virus. A few spots in the viruses’ DNA seem particularly prone to rearrangement, so remixing happens often. The study suggests that recombination between viruses has shaped the evolution of SARS, says Baric.

Several of the strains could already grow in human cells, Shi’s team found. That indicates “there’s a chance that the viruses that exist in these bats could jump to people,” Frieman says. “Whether they will or not is anybody’s guess.”

As Trump is now out of the picture, all the scientists who cucked to the media narrative of Trump Bad, now the questions come pouring in on the real origins of the Coronavirus.

Also in 2017, a subagency of the National Institutes of Health (NIH) – headed by Dr. Anthony Fauci – resumed funding a controversial grant to genetically modify bat coronaviruses in Wuhan, China without the approval of a government oversight body, according to the Daily Caller. This comes after a temporary suspension of federal funding in 2014 for gain-of-function research by which bat COVID was genetically manipulated to be more transmissible to humans. Four months prior to that decision, the NIH effectively shifted this research to the Wuhan Institute of Virology (WIV) via a grant to nonprofit group EcoHealth Alliance, headed by Peter Daszak.

Notably, the WIV “had openly participated in gain-of-function research in partnership with U.S. universities and institutions” for years under the leadership of Dr. Shi ‘Batwoman’ Zhengli, according to the Washington Post‘s Josh Rogin.

In 2017, however, the “Potential Pandemic Pathogens Control and Oversight (P3CO) Framework was formed within the Department of Health and Human Services (HHS),” which was tasked with evaluating the risks involved with enhancing dangerous pathogens, as well as whether proper safeguards are in place, before a grant into ‘gain-of-function’ or similarly risky research can be issued.

Fauci’s National Institute of Allergy and Infectious Diseases (NIAID) – the subagency which funded EcoHealth – didn’t think the grant needed review, and resumed their relationship with Daszak without flagging it for the P3CO committee, an NIH spokesperson told the Caller.

Or – and just hear us out, a random bat infected a yet-to-be determined intermediary animal species, which nobody has been able to identify after 18 months of searching, which then infected humans in Wuhan – coincidentally home to the bat coronavirus lab, before anywhere else in the world.

In other news...
How Deadly is COVID? The Science Vs the Media Hype
Fox hosts lament spike in crime amid push to ‘defun...
Biden Effect: Jobless Claims Increase To 412,000 – ...
Homelessness Is Becoming A Crisis Of Epic Proportio...
Federal Jury Convicts Massachusetts Man Who Attempt...
Biden SNAPS on CNN Reporter and BERATES Her for Sim...
0 Comments
Inline Feedbacks
View all comments