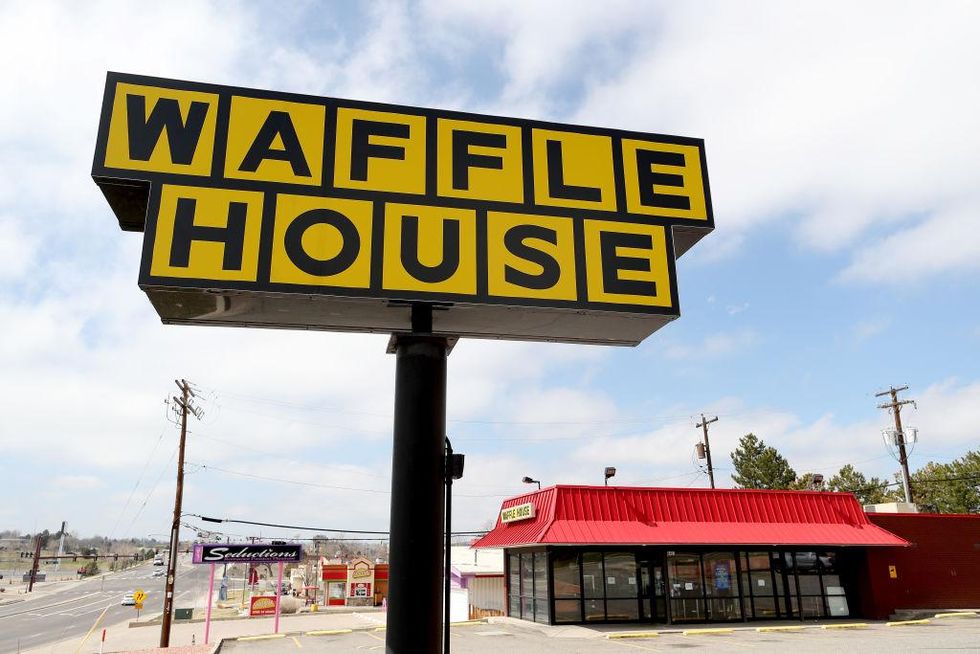 Fantasy Football punishments for coming in last have gotten creative in recent years, including grown adults being forced to take the ACT standardized test used for college admissions and having to pose nearly nude in photo shoots for a calendar that was presented to the league’s other owners. One fantasy football loser chronicled his punishment for finishing last in his league – spend 24 hours in a Waffle House in Mississippi.

Journalist Lee Sanderlin was sentenced to 24 hours in a Waffle House as part of his punishment for losing his fantasy football league. There was one saving grace, Sanderlin could shave an hour off his 24-hour penance for every waffle he consumed. What sounded like a boon ended up being a poisoned chalice as the fantasy football loser ate a diabetes-inducing amount of waffles.

On Thursday afternoon, Sanderlin kicked off his live-tweeting of his journey that would be full of carbohydrates, regret, and intestinal pain.

“I am coming to you live from a Brandon, Mississippi Waffle House. I, a total loser, came in last place in my fantasy football league,” Sanderlin wrote on Twitter before ordering his first two waffles. “As punishment, I spend 24 hours in a Waffle House. Every waffle I eat shaves an hour off the clock. It’s 4:07 Central.”

I got some books, some magazines and some podcasts. And two waffles to start.

2 down. That means two hours down. 21.37 hours left roughly. Already my stomach is rumbling. Gonna be a long one.… https://t.co/eWiLv9cHeZ

Within an hour and a half into his carbohydrate castigation, Sanderlin managed to consume four waffles, which left him feeling “immense discomfort” and “dead on the inside,” but he cut four hours off his Waffle House punishment.

The now-viral tweets show that Sanderlin was feeling defeated, but then sprung to life and ordered a fifth waffle thanks to someone using the restaurant’s digital jukebox to play the motivational “Eye of the Tiger,” Survivor’s 1982 hit song and soundtrack to the “Rocky III” training montage.

And now it’s Hotel California. How fitting. I can check out any time I want, but I can never leave (yes I can in 17 hours)

It wasn’t even three hours into his Waffle House saga that he started asking his Twitter followers for thoughts and prayers. People on Twitter were “pulling” for Sanderlin to triumph over the waffles.

“Y’all they’re going down like cement now, and the heart is beating real heavy-like. I’m the only non-employee in here,” Sanderlin tweeted. “Got half of waffle 6 left and so many hours.”

Y’all they’re going down like cement now, and the heart is beating real heavy-like. I’m the only non-employee in he… https://t.co/NeqhLzVyg3

With plenty of time on his hands, Sanderlin posted his fantasy football roster that got him into this predicament in the first place, which only made him want to puke.

Obviously, that’s why I’m going on hour 6 in a waffle house my man. If I could finish this cold, concrete ass waffl… https://t.co/2b6QxLU0Tr

After eating the sixth waffle, Sanderlin looks like he’s developing heart disease in real-time. Eating the waffles becomes a Kobayashi Maru for the young man; it takes away an hour but is also rapidly changing his blood type to maple syrup.

Quick little trip to the bushes outside if you know what I’m saying. Now, back into the breach https://t.co/gwGvvUkeE1

Hahaha remember when I ordered a 7th waffle? Full crash and burn. Not gonna finish it. My body is in revolt/shuttin… https://t.co/EQL8m7XkFN

Sanderlin, who is an investigative reporter for the Clarion Ledger, quickly finds out that nothing good happens at the Waffle House at 1 a.m.

All that stands between me and going home in the next 30 minutes. So damn close. https://t.co/2EgD4Dajdv

The 25-year-old gave sage advice to all his adoring fans, “I recommend absolutely no one do this.”