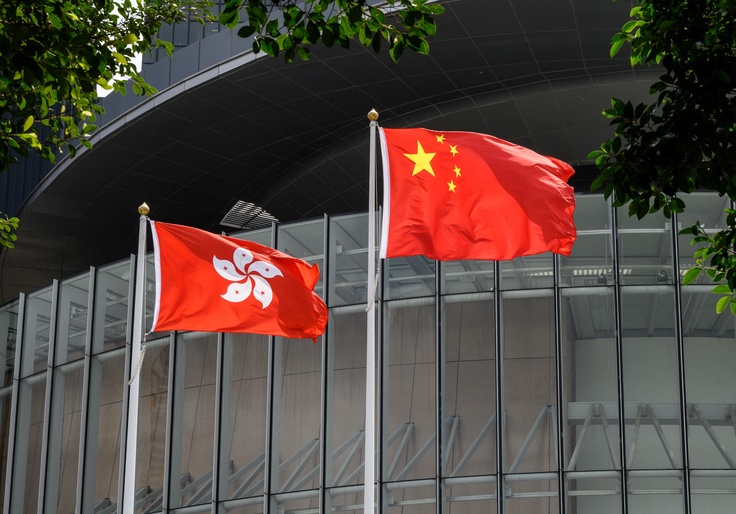 Authorities in Hong Kong this week used a Chinese national security law defended in the New York Times to arrest five editors at a newspaper critical of Beijing.

Police raided the offices of Apple Daily and arrested the editors for violating a national security law imposed last year that makes it illegal to call for sanctions against China. In October 2020, Regina Ip, a Hong Kong official known to have close ties to Beijing, defended the law in a New York Times op-ed. Ip credited the measure for ending protests in Hong Kong, which she claimed had devolved into violence.

“The scale and frequency of antigovernment protests has now subsided — thanks to a national security law for Hong Kong promulgated in Beijing on June 30,” she wrote in the Times.

The arrests come as the Chinese government cracks down on media outlets and activists who support the pro-democracy movement in Hong Kong. Police arrested Apple Daily founder Jimmy Lai last year on charges under the national security law. Lai was convicted this year on fraud charges that Western observers have claimed were fabricated against him because of his staunch opposition to the Chinese Communist Party.

While the Times has published news articles criticizing the national security law, the paper has come under criticism for its business deals with China Daily, a Communist Party propaganda outlet. The Times last year removed content it published in partnership with the state-run outlet.

Ip’s rhetoric in the Times article matches that put out by state-run media outlets in defense of the Apple Daily arrests.

“The West tends to glorify these people as defenders of Hong Kong’s freedoms, but they have done great harm to the city by going against its constitutional order and stirring up chaos and disaffection toward our motherland,” she wrote for the Times. “Something had to be done, and the Chinese authorities did it.”

An editorial from CGTN, a news outlet controlled by the Chinese government, said the arrest of the Apple Daily executives “was necessary to protect against destabilizing foreign forces.” The editorial also claimed the newspaper had stepped “over the line of journalism into sedition” by publishing articles defending democracy protests in Hong Kong.

“Helping these foreign actors hurt China by giving them ammunition to impose sanctions on China amounts to betraying the motherland,” the editorial said.

While Ip defended the law, she downplayed its use by Hong Kong authorities.

She wrote that “despite all the jitters” about the law, only 28 people had been arrested under it. She said that just one person had been charged for secession and terrorism under the law. The arrestee, she said, had been accused of driving a motorbike into police officers and wielding a banner that read, “Liberate Hong Kong, Revolution of Our Times.”

The Times faced blowback from conservatives over the Ip piece in light of how the newspaper handled an op-ed the paper published by Sen. Tom Cotton (R., Ark.). The Times‘s opinion page editor was forced to resign after publishing the op-ed, in which Cotton urged then-president Donald Trump to call in the military to curtail violent protesters. Times journalists complained that the piece put minority colleagues in physical danger, leading to the ouster of editor James Bennet.

A spokeswoman for the Times did not respond to a request for comment about the Ip piece.

In other news...
Armenia’s Prime Minister Scores Surprising Election...
Revisit: My First Father’s Day Without Dad
Biden administration accused of 'going soft' on Chi...
WATCH: President Biden Embarrasses Himself Once Aga...
How the heck does Ilhan Omar get to serve on Foreig...
Florida mayor under fire after claiming Pride parad...
0 Comments
Inline Feedbacks
View all comments