WHAT? Biden Gives Putin List Of 16 ‘Off Limits’ US Infrastructure Targets He’s Not Allowed To Cyber Attack 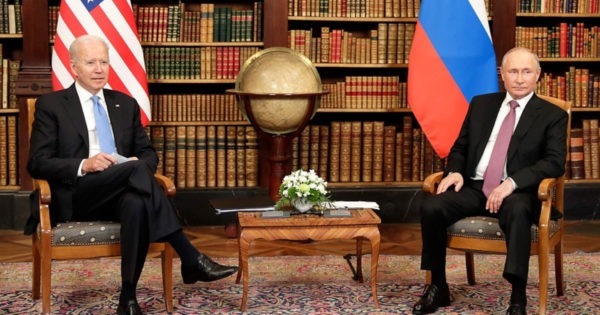 Joe Biden handed Russian President Vladimir Putin a list of 16 “off limits” US critical infrastructure targets during their meeting in Switzerland.

“So we agreed to task experts in both our countries to work on specific understandings about what’s off-limits and to follow up on specific cases that originate in other countries and in either of our countries,” Biden added. During the meeting Biden asked Putin about the Colonial Pipeline cyber attack. “When I talked about the pipeline that was hit with ransomware in the United States, I looked at him and I said, ‘How would you feel if ransomware took the pipelines from your oil fields?’” Biden said. Putin noted that “it would matter.”

President Biden says he gave Putin a list of 16 critical infrastructure elements that should be off-limits when it comes to cyberattack. They also tasked experts with figuring out a joint understanding of what is “off limits” for these cyber attacks, Biden says.

This comes as the US federal government has repeatedly pointed to Russia or Russian actors for being responsible to the series of devastating cyber attacks that have struck at the heart of US critical infrastructure. The latest move by the President could have serious national security implications. Though, Biden hinted that any attacks on the listed targets could prompt a “governmental response,” according to reports.

Following Biden’s meeting with Putin, the American President yelled at reporters for asking him tough questions, but quickly apologized, as National File reported.

“I shouldn’t have been such a wise guy with the last answer I gave,” Biden said of his exchange with CNN’s Kaitlan Collins, during which he yelled “What the hell do you do all the time” and admonished her that she was in the “wrong business.”

Biden also elaborated on the reasoning for his outburst, stating, “Look, to be a good reporter, you’ve gotta be negative. You’ve gotta have a negative view of life, okay, it seems to me, the way you all – you never ask a positive question . . . the thing that always amazes me about the questions – and I apologize for having been short about this before – if you were in my position, would you say ‘Well, I don’t think man, anything is gonna happen, it’s gonna be really rough,’ you’d guarantee nothing happens. You guarantee nothing happens.”

President Biden apologizes after snapping at a reporter: “I shouldn’t have been such a wise guy with the last answer I gave.” pic.twitter.com/TCn8FuRmZN

In other news...
The Green Wave Is Here… Don’t Get Left Behind
PREVIEW: Epochs of the Lotus Eaters #7 | Film Revie...
As ‘defund the police’ movement spread, Smith &...
Arabella’s “Dark Money” Activists Trying to Tilt 20...
GOP reps call for VP Harris to be removed as border...
Supreme Court rules for Catholic group in Philadelp...
0 Comments
Inline Feedbacks
View all comments