VIDEO: Putin Slams U.S. For Allowing BLM Riots, Says Russia Will Never ‘Allow That To Happen In Our Territory’ 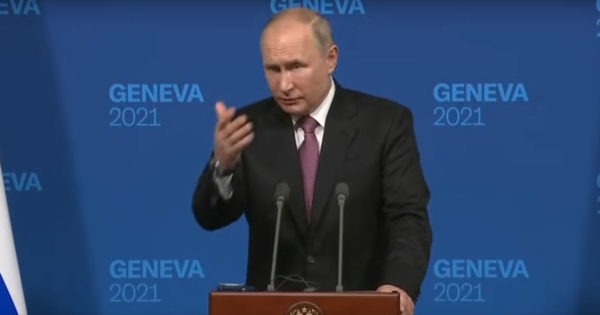 Russian President Vladimir Putin responded to an aggressive question from a Western journalist on Wednesday by invoking the violent and embarrassing Black Lives Matter riots in the united States that tore the country apart in 2020, noting that he was doing his “utmost in order to not allow it to happen” in Russia.

After a journalist yelled “what are you so afraid of” in regards to the arrest of Alexei Navalny, Putin stated, “America just recently had very severe events, well-known events, after the killing of an African American. And the entire movement developed known as Black Lives Matter. I’m not going to comment on that, but here’s what I do want to say: What we saw was disorder, destruction, violations of the law, etc.”

“We feel sympathy for the United States of America but we don’t want that to happen on our territory,” Putin stated. “We’re doing our utmost in order to not allow it to happen.”

Putin also invoked the political persecution of Trump supporters by the Biden regime, noting, “People went into U.S. Congress with political demands. Four hundred people are not facing criminal charges. They are facing prison terms of up to 20 maybe 25 years. They are called ‘homegrown terrorists,’ They are being accused of many other things.”

“One of the participants, a woman, was shot dead on the spot. She was not threatening,” Putin said in reference to the assassination of Ashli Babbitt. “Why am I bringing this up? Many people are facing the same things as we do. I am stressing this: We are sympathizing with the United States but we do not want the same thing repeating here.”

Putin even went on to reference the rampant urban violence in America, stating “People are shot and killed every day [in the U.S.]. You don’t have a chance to open your mouth and you’re shot dead.”