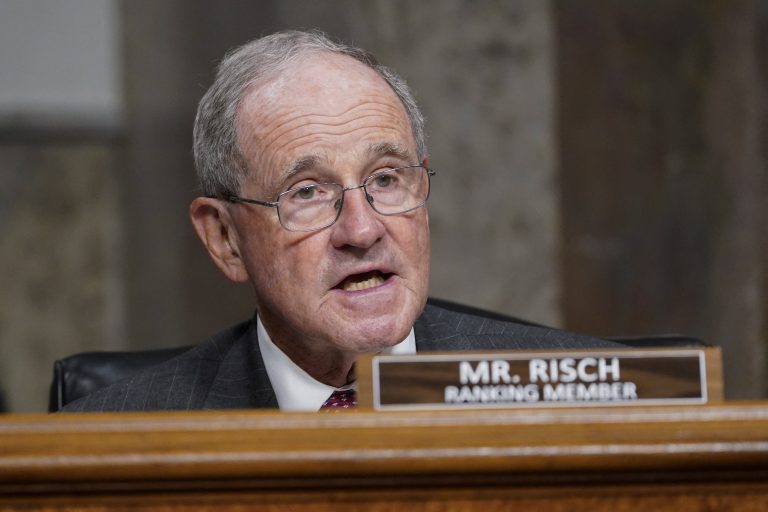 Sen. Jim Risch (R., Idaho), ranking Republican on the Senate Foreign Relations Committee, says he will not cave to demands from Democrats that he lift a congressional hold on a tranche of Palestinian aid money until he is provided with guarantees that the taxpayer funds will not enrich terrorist groups, including Iran-backed Hamas.

House Democrats led by Rep. Jamie Raskin (D., Md.) have been pressuring Risch to lift a hold on some $75 million in aid money in the wake of Hamas’s war last month with Israel. Raskin and 145 other Democrats pressed Risch on the matter in letter sent earlier this month. They claim the money is needed for humanitarian reconstruction projects in the Gaza Strip, which came under intense fire from Israel as it struck scores of Hamas positions.

Risch rejected the Democratic pressure campaign on Wednesday in a response letter to the Democrats declaring that he will not release the funds until the Biden administration provides assurances the money will not be diverted to Hamas or be used by the Palestinian government to pay terrorists and their families, according to a copy obtained exclusively by the Washington Free Beacon.

Risch’s hardline stance is certain to rankle Democratic lawmakers who claim the money will be spent to address humanitarian needs in the Gaza Strip. As Democrats have broadly supported the Biden administration’s decision to unfreeze U.S. aid to the Palestinian government, potentially in violation of the law, they have also called for U.S. security assistance to Israel to be frozen. The growing divide between the parties on aid to Israel and the Palestinian government has emerged as a flashpoint in the weeks since Israel defended itself against an onslaught of more than 4,000 missiles fired by Hamas and other Palestinian terrorist groups.

“There are multiple holds on the longer-term projects, as they are under review for compliance with the law,” Risch wrote. “I hope you and your colleagues are not suggesting we should turn a blind eye to the potential of U.S. funds being used to support terrorism.”

Risch further accused Raskin and his colleagues of politicizing the issue, clarifying that his hold only applies to funds that are likely to enrich Hamas and be spent on a Palestinian government policy known as “pay to slay,” in which international aid dollars are provided to convicted terrorists and their families.

Risch says that he will under no circumstances lift the funding hold if the money will be spent by the Palestinian government on terrorists. “So long as the ‘pay to slay’ policy and the activities it supports continue, you can count on me to robustly examine any funds which may wind up in the hands of Hamas, the Palestinian Islamic Jihad, or the PA,” he wrote.

“A blank check,” Risch maintains, “will not improve the condition of the Palestinian people while their leaders in the West Bank and Gaza subordinate their needs to violent agendas.”

The Biden administration already skirted Congress this month to push through more than $170 million in emergency funding to the Palestinian government and Gaza Strip. The money was sent despite objections from leading Republicans like Risch and is not subject to his hold.

The release of that money, which was approved by the State Department without congressional consultation, likely violates a 2018 law known as the Taylor Force Act, which prohibits the U.S. government from funding the Palestinian government until it stops paying terrorists. The State Department said in a March report to Congress that the Palestinian government spent at least $151 million on its terrorist benefits program, the Free Beacon first reported.

Congressional Democrats are portraying Risch’s hold as part of an effort by Republicans to deny the people of Gaza humanitarian assistance, the senator says in his letter.

Risch and other members of the Senate Foreign Relations Committee already released a portion of aid money that the Biden administration identified as “quick impact,” meaning that barriers are in place to ensure the money is spent on reconstruction projects and not terrorism-related causes.

“If you and your colleagues truly care about the plight of the Palestinian people, I would strongly encourage you to condemn and call on the PA to end its egregious ‘pay to slay’ program and instead direct this money toward humanitarian assistance and other economic projects,” Risch wrote. “This would have a far greater benefit for the Palestinian people.”