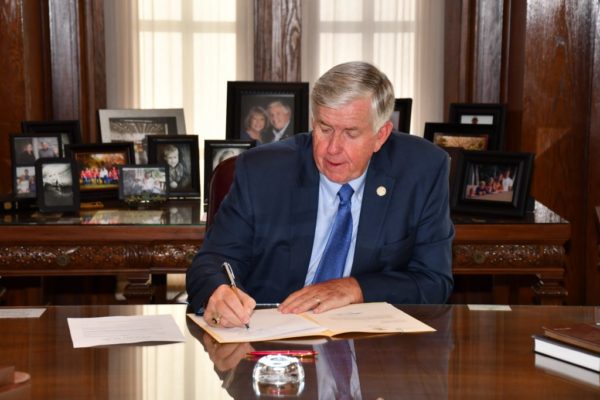 Missouri Republican governor Mike Parson on Saturday officially signed into law a bill that bans local police from enforcing federal laws that inhibit people’s Second Amendment rights, and even punishes the police departments for doing so with $50,000 in fines every time an officer acts like an anti-gun tyrant.

According to Parson, his effort “draws a line in the sand and demonstrates our commitment to reject any attempt by the federal government to circumvent the fundamental right Missourians have to keep and bear arms to protect themselves and their property.”

The passage and signing of this bill represents the culmination of a nearly decade-long effort in the state of Missouri, and finally Republicans seem to be emboldened enough to lay down the law — literally — to protect the Second Amendment. Democrats who seek to take away people’s guns are consistently disingenuous, because they rarely admit that their plan is about disarming the citizenry to pave the way for a globalist New World Order. Will other Republican governors follow Parson’s lead and strongly stand with the Second Amendment?

Joe Biden signed unconstitutional anti-gun executive orders, even saying “No amendment to the Constitution is absolute” in the White House Rose Garden, and he tasked his DOJ under leftist Merrick Garland to come up with federal “Red Flag law” laws that can be sent to Congress.

The National Rifle Association has been extremely weak in recent years, even supporting Red Flag gun confiscation laws that allow law enforcement to seize people’s firearms without warning. With so much of the Republican Party compromised by globalism, can more Republicans like Parson do the right thing and protect Americans’ constitutional rights?