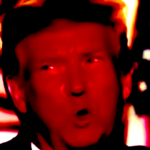 The Lincoln Project people are masters at getting under Donald Trump’s skin. The group has smoothed out some pretty rough bumps it endured recently and is hot on the tail (not a typo) of our ex-president. They love to pit the Donald against the self-described Grim Reaper aka Minority House Speaker Mitch McConnell (R-KY). Then, for an added zing, they ask Trump if he is “impotent.” Check out their newest ad.

This time, the Lincoln Project ad is going to air on Fox News as Trump is at his New Jersey Bedminster resort. Not likely he will miss it. The ad talks about “nationalism” and “patriotism.”

Children and adults inspire patriotism as they say their pledge of allegiance. The Lincoln Project describes the ad this way:

‘Our allegiance should be to our country, not to Donald Trump or his political party. That’s why we’re airing this reminder to him directly while he vacations in Bedminster today. We are playing this on Fox News so he gets the message loud and clear. Our allegiance is the nation…not Donald Trump.’

Now, blind allegiance has always been what Trump has demanded. The power- and money-hungry or as they prefer to be called Republican lawmakers have worked in tandem over the past five years to kill the Republican Party.

Founder of the anti-Trump movement, A Call for American Renewal, Miles Taylor said as reported by CNET:

Instead of half of an equal legislative body, Republican legislators publicly claim their fealty to Trump. A few Republicans, such as Representative Liz Cheney (R-AZ) have been trying to save the Republican Party they knew. But it has already flatlined.

‘I’d be surprised if four of the 10 Republicans who voted to impeach Trump in the House are still in office in 2023.’

The GOP people in office have been displaying “blind allegiance” not to the American flag but to a mere mortal who threatens to destroy those who do not offer him their allegiance, and he most often succeeds:

‘Blind allegiance to Trump is a betrayal to the Republic. It’s time for every American to pledge allegiance to the American Flag — not a Trump 2024 banner.’

Those who owe allegiance to Trump must not merely support him, they must believe his lies, his truly crazy reality. Representative Andrew Clyde (R-GA) was a good example of this when he compared January 6 insurrection to “a tourist visit,” according to CNN:

‘[T]here was no insurrection and to call it an insurrection, in my opinion, is a bald-faced lie.’

Three White Lions Podcast, Gloria Christie reads her week’s most important news/ commentary stories in the liberal online newspaper The Bipartisan Report. Gloria Christie Report her newsletter for people on the go. Written in her own unique style with a twist of humor/briefer version of  Bipartisan Report. Christie’s Mueller Report Adventures In Bite-Sizes a real-life compelling spy mystery. Find her here on Facebook.

In other news...
‘Fair trial’? Three women charged with leaving pig...
The Return of the 1970s: Biden is Confused, Incompe...
Man charged in fatal shooting of teen for ‘smiling’...
“Year of the Unborn Baby!” States Have Passed Dozen...
GOP Rep. Dan Crenshaw Humiliated Live On-Air During...
For Palestinians, the Past Remains the Future
0 Comments
Inline Feedbacks
View all comments