Police Arrest Black Male Suspect After Kidnapping, Stabbing Of 4-Year-Old Whose Body Was Left In Street 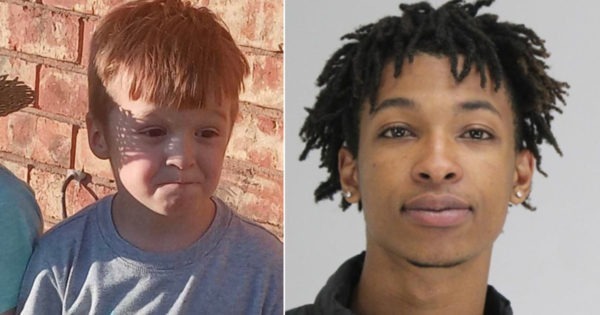 An 18-year-old black male has been arrested in connection with the kidnapping and death of 4-year-old Cash Gerson, whose body was found lying in the middle of the street, “covered in blood” from wounds incurred by “an edged weapon” according to police.

Local jogger Antwainese Square discovered the boy’s body around 7 a.m. “I see something laying in the road and my initial thought was that it was a dog,” she said. “The closer I get to it I can tell it’s a human cause I see a hand and I see legs. Very traumatizing. I have three kids. To see a child covered in blood in the middle of the street, it’s truly traumatizing.”

“That’s when I noticed the baby had ants at the bottom of his feet,” Square added.. “So I knew he was deceased then. It was heart-wrenching because this baby could have been no more than 5.” The child was found shirtless and shoeless.

Cash’s mother told local ABC affiliate WFAA that her son was sound asleep when the suspect broke in through the door and reportedly kidnapped him, according to surveillance video.

Darriynn Brown, 18, arrested in kidnapping, murder of toddler in Dallas

Victim has been identified by local media as Cash Gernon

“Cash was sleeping when he was kidnapped,” mom says

Suspect was reportedly wearing ankle bracelet for prior charge pic.twitter.com/faQZbeXw8a

Brown reportedly lives with his parents, who support him financially, at an address located a mere half-mile from the location where the child’s body was discovered. The suspect has been charged with kidnapping and theft, with more charges likely following the results of an upcoming forensic report according to police. The suspect is being held on $750,000 bail for each charge.

“Through the hard work of the men and women of the Dallas Police Department this criminal was brought to justice and it would not have been made possible without the Dallas FBI Evidence Response Team and the public’s assistance,” police said in a statement.

In other news...
7 Ills That Don’t Need Pills
Cuomo 'conveniently' announces new mask rules as he...
Ethics Complaint Filed Against Maxine Waters Accuse...
BAPTISED IN JESUS- Our High Priest For Ever After T...
Gaetz associate to plead guilty to federal charges
The American Age, The American Epic Has Only Just B...
0 Comments
Inline Feedbacks
View all comments