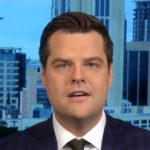 A Florida political action committee has deployed a sign behind a plane in the Orlando area that proclaims “Tick Tock Matt Gaetz,” calling observers’ attention to the fact that Gaetz — a Florida Republican Congressman and close Trump ally — could be running out of time before facing federal criminal proceedings. The political action committee, which is called “Remove Ron” in reference to Florida Republican Governor Ron DeSantis, was flying their sign in the vicinity of a federal courthouse where Gaetz ally Joel Greenberg had been slated to formally plead guilty to crimes including child sex trafficking. Gaetz could be implicated in Greenberg’s criminal activity.

Check out an image of the sign in the Orlando area below:

We are flying this banner around the Orlando Federal Court where Matt Gaetz’s wingman Joel Greenberg is pleading guilty to sex charges. Tick Tock Matt Gaetz, time is running out ⏳. pic.twitter.com/gxdtPFcQPY

Gaetz has consistently maintained that he is innocent, but he’s not exactly a credible source, and federal authorities have clearly established the seriousness of an investigation into the Congressman, which is connected to the Greenberg case. Last year, according to reporting, federal investigators even seized Gaetz’s cellphone. The Congressman has reportedly been under federal criminal investigation over potentially victimizing the same then-minor whose case led to the child sex trafficking charge against Greenberg. Federal authorities have reportedly looked into other issues as well, including whether Gaetz accepted travel to the Bahamas in exchange for political favors like pro-marijuana legislative advocacy.

Notably, former President Donald Trump has been mostly pretty quiet regarding the proceedings against Gaetz. He has also stayed somewhat distant from an ongoing federal criminal investigation into his former lawyer Rudy Giuliani, who has been under scrutiny for potentially violating federal statutes covering foreign lobbying. Giuliani may have been covertly ferrying the interests of foreign individuals to Trump when advocating for the then-president to fire Marie Yovanovitch from her post as U.S. Ambassador to Ukraine, a step that Trump did, in fact, end up taking.