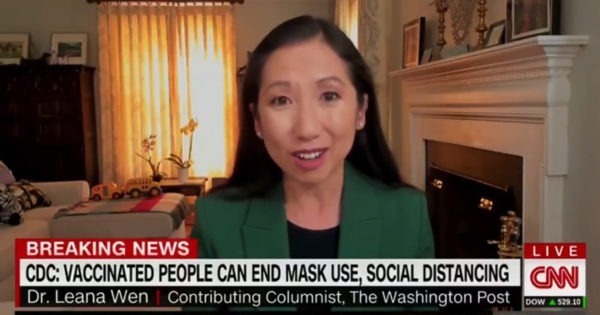 A medical doctor and professor who writes columns and regularly appears as a guest on CNN slammed the CDC’s decision to let vaccinated people stop wearing masks, and suggested there should be a mechanism in place – like a vaccine passport – to keep those who choose not to take the vaccine from appearing in public.

While Dr. Leana Wen applauded the Biden regime and the CDC for sending the message that “vaccination is your ticket back to pre pandemic life,” she revealed that she was ultimately “shocked by this announcement,” referring to the decree from the CDC that those who have been fully vaccinated no longer need to wear masks in most indoor areas. “I think they went from one extreme to another,” said Wen, “The major step that’s missing here is, how do we know that people are telling the truth?”

I am shocked by the CDC’s abrupt reversal of their guidelines for vaccinated people. While I agree that vaccinated can choose what they want to do, this only works if there’s a way to check vaccination status. Otherwise, what’s to stop the unvaccinated from endangering everyone? pic.twitter.com/q7185cTZRG

She questioned, “If you’re going to the grocery store, maybe you’re fully vaccinated, you take off your mask at the grocery store, but who is going to be checking to see if others are vaccinated?” The Biden regime is working with the private sector to require vaccine passports in such a scenario, as National File reported earlier this year. It remains unclear if the 11 states who have banned vaccine passports, led by Florida Gov. Ron DeSantis, who recently signed legislation effectively banning businesses, schools, and governmental entities from requiring proof of vaccination, may have convinced the Biden White House to drop their plan to have private businesses require a vaccine passport that is supported by the White House.

“So what does that mean if I’m bringing my son, my four year old who is not fully vaccinated, now he’s going to be in a grocery store, potentially exposed to people who are not vaccinated, who could be a danger to him,” said Wen, in an exasperated tone. “I am kind of befuddled as to where this guidance came from. I think there are a lot of steps that were missing,” she added, again alluding to vaccine passports.

As National File previously reported, the Biden regime is working with private sector giants to require vaccine passports in scenarios similar to those described by Wen. However, as more states have pushed back on the idea of vaccine passports, news from The Washington Post, The New York Times, and other media outlets favored by the Biden White House relating to vaccine passports has stopped almost entirely. It remains unclear if this program is still underway, or if massive opposition from conservatives and health privacy advocates have forced the scheme to be abandoned.

In other news...
Need More Proof The 2020 Election Was A Fraud? How ...
Israeli, Palestinian Supporters Clash Outside Israe...
On Armed American Radio: Talking about the move in ...
School accused of violating Free Exercise clause wi...
Rallies Set Across America in Support of Israel as ...
BASED: Marjorie Taylor Greene Tells ‘Crazy Eyes’ AO...
0 Comments
Inline Feedbacks
View all comments