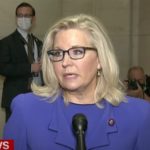 The GOP, at this point, does not appear to be based on principles of fiscal conservatism, social conservatism, state’s rights, small government, or lower taxes for everyone. Instead, they are deeply under the control of a con man and grown child who’s still throwing a tantrum because he lost the game he was playing. Conspiracy theories and “owning the libs” seems to be their sole go-to strategies.

Liz Cheney (R-WY) a;;eared on Fox News in an interview with Brett Baier, in which she told him that Fox News has “a particular obligation” to tell the truth about Trump’s dangerous election lies. Baier, who bristled and became defensive, insisted that they’ve done so on his show several times.

Fox News has a whole section of their website dedicated to stories about “voter fraud concerns.” Dominion Voting Systems is suing Fox News for $1.6 billion  over false claims they made about vote tabulating machines from their company being rigged to steal the vote from Trump. Well-known Fox News personalities like Maria Bartiromo, Lou Dobbs and Jeanine Pirro repeated their support for the “stolen election” claims so stringently that Fox News finally had to issue retractions or lose millions in court. Brett Baier and others on his show may have said they don’t support the Big Lie about the 2020 election, but no one on the show has chosen to leave a network that allows it’s top-rated stars, Sean Hannity and Tucker Carlson, to perpetuate those lies.

For her part, Liz Cheney has been in office since 2017 and voted against the impeachment of Donald Trump for trying to extort a vulnerable foreign country. She never spoke out when Trump spread lies about Joe Biden, Nancy Pelosi, Maxine Waters, or anyone else. She said nothing when Trump goaded his rally crowds into cheers of “send them back!” when he mentioned a group of black and brown women in Congress until they began receiving numbers death threats. She was silent when her conspiracy theory-minded Republican colleagues spread disinformation to Republican voters. It’s laudable that she is speaking up now, but she failed to speak out before, making her just as guilty for what the GOP has become as anyone else.

Twitter was supportive of Cheney’s pushback against Fox News and for standing up for the truth, at least in this matter. Read some of their comments below: 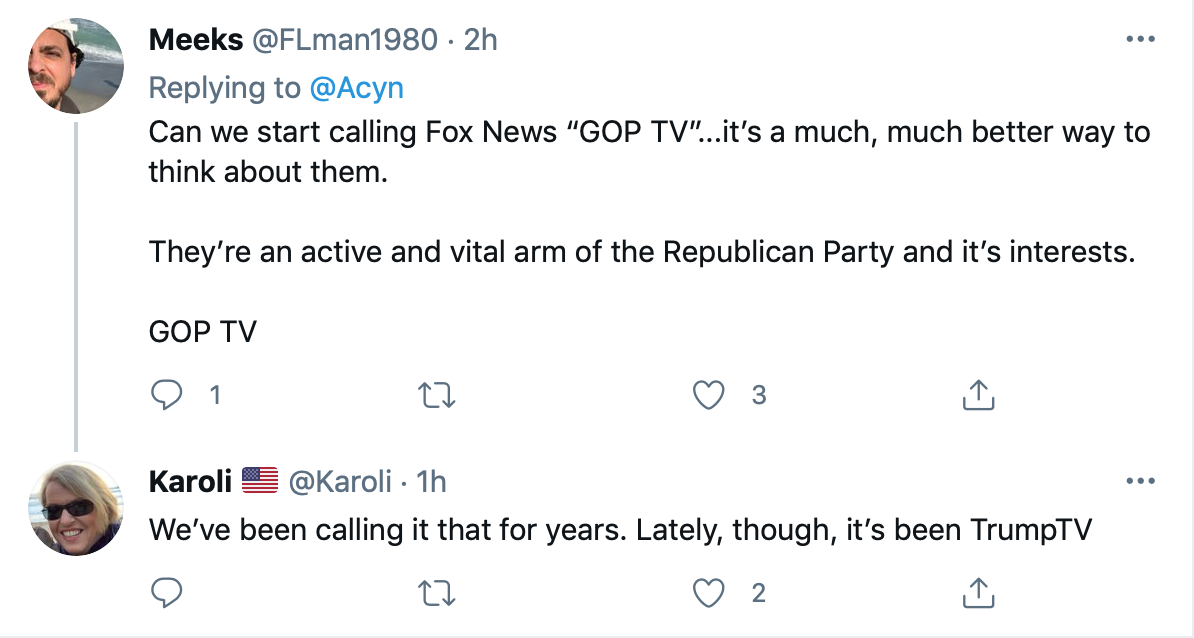 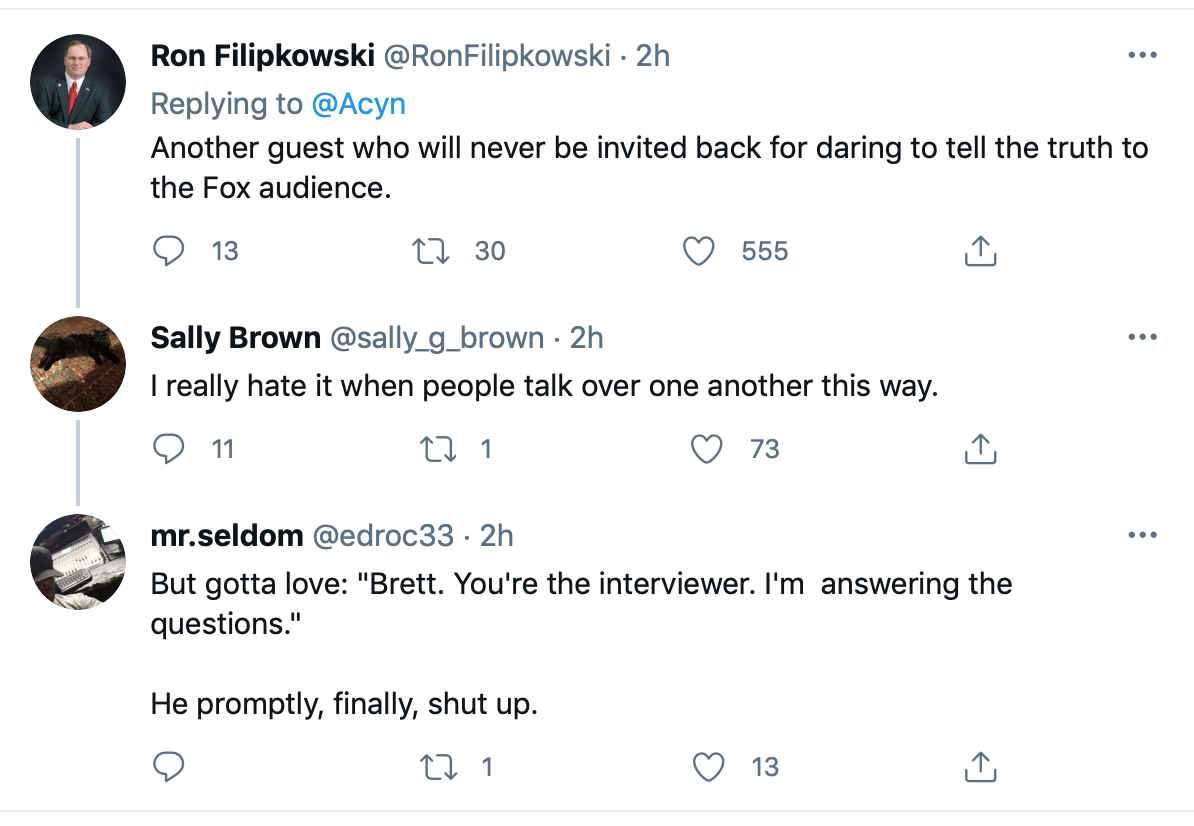 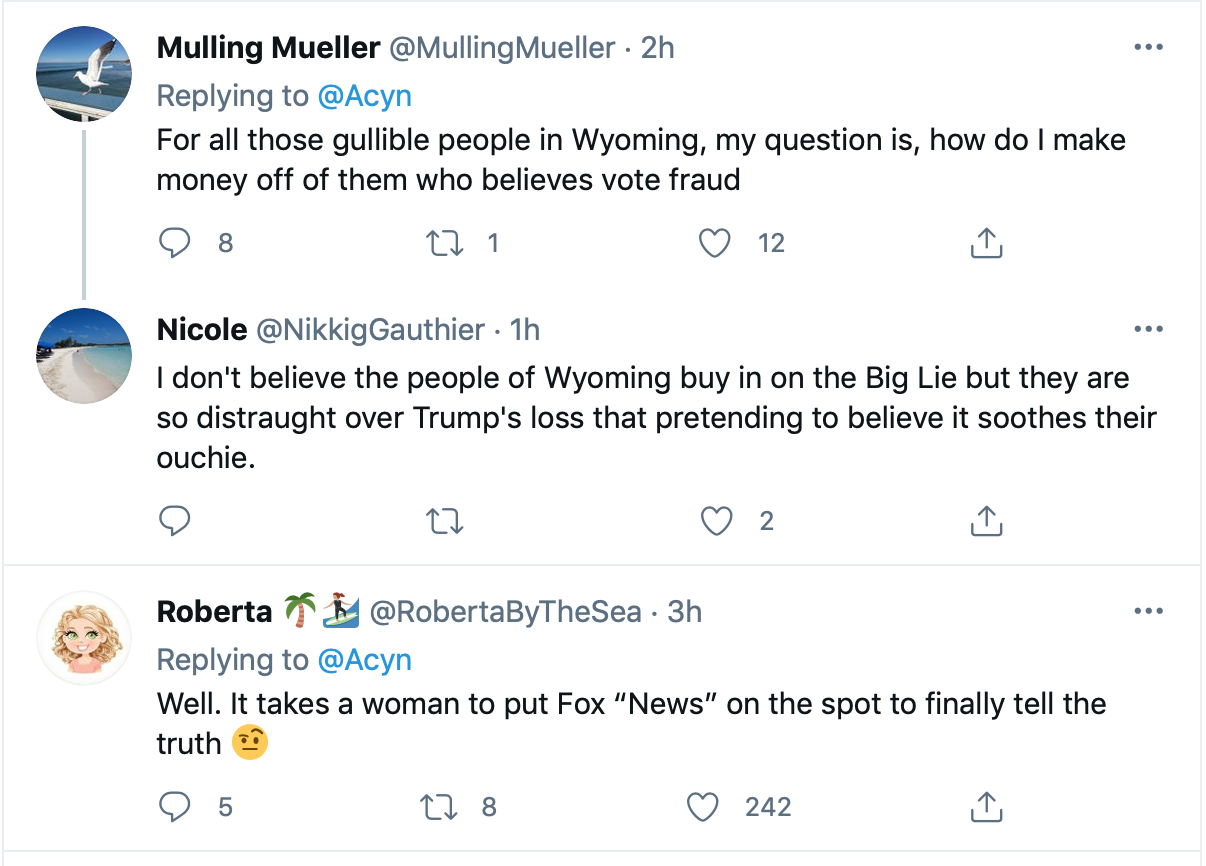 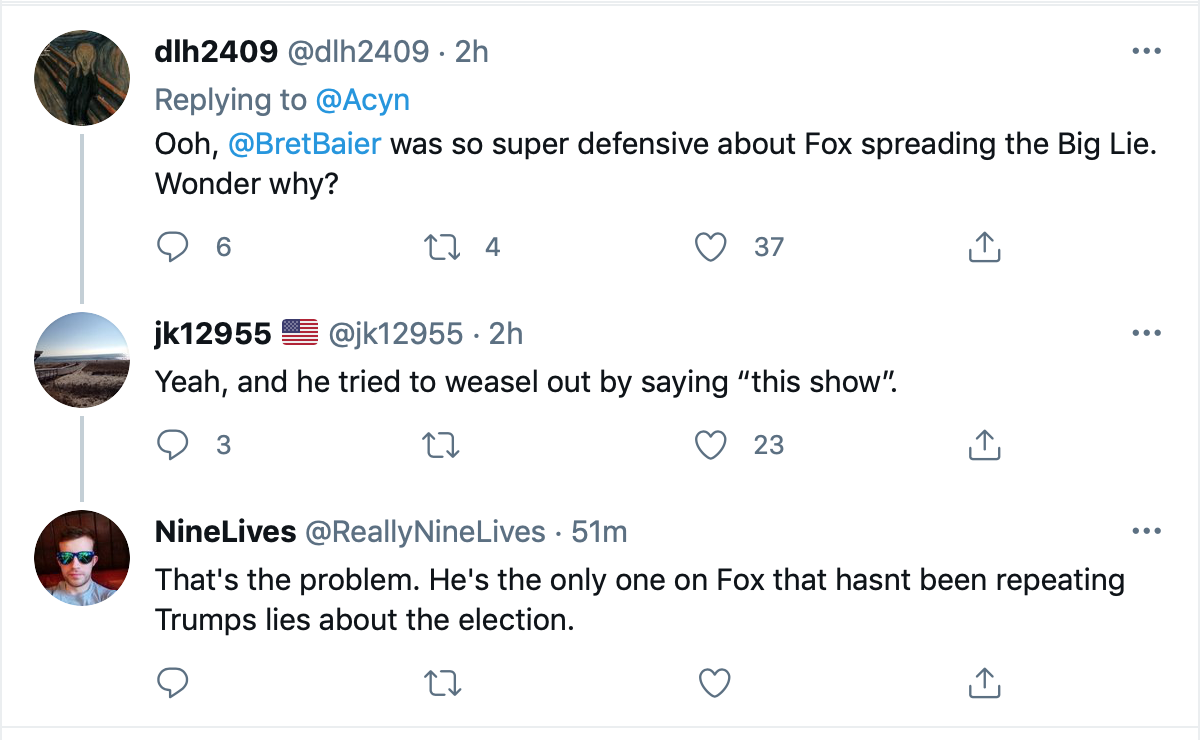 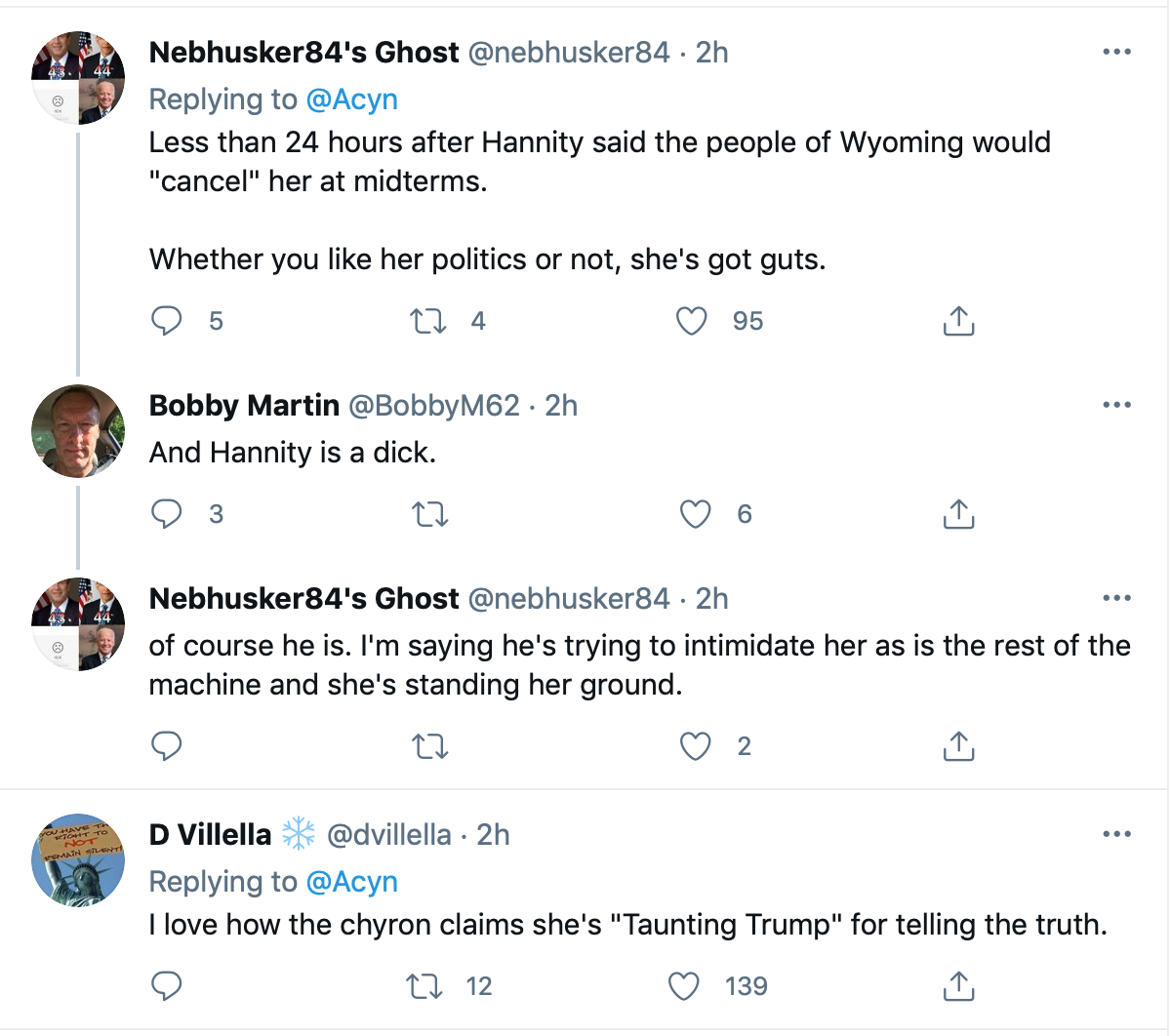 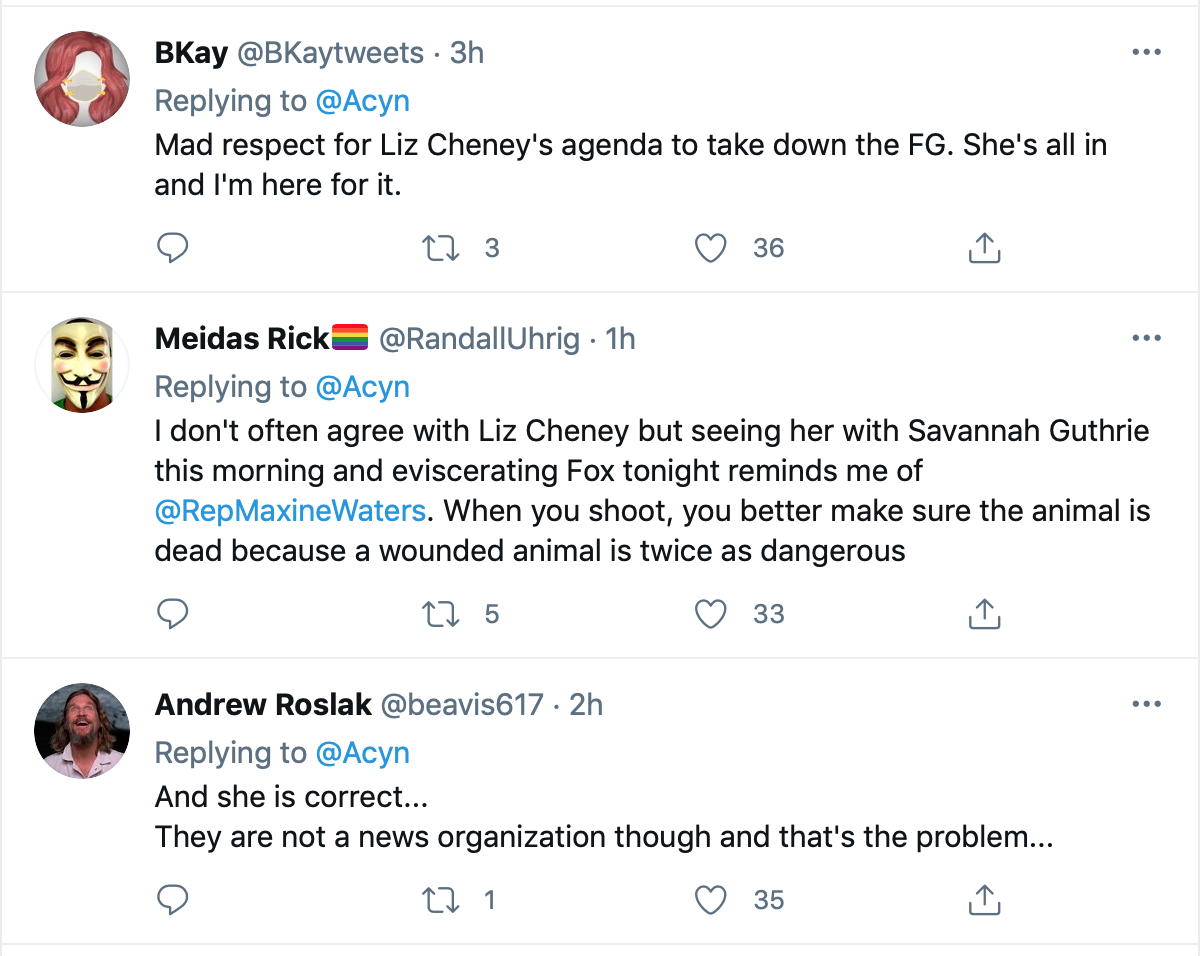 Click this link for the original source of this article.
Author: Carissa House-Dunphy