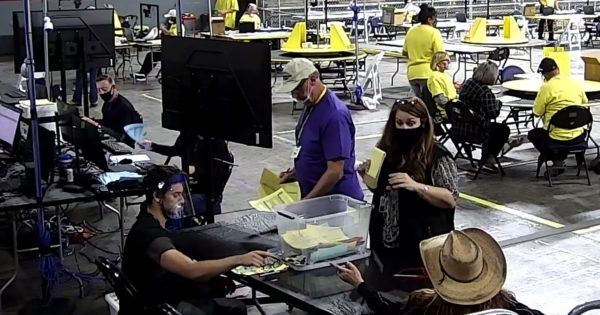 New information has surfaced suggesting that Maricopa County election officials deleted voter databases from the 2020 election, despite being under a subpoena, before they were delivered to the auditors conducting the full forensic audit of votes in the county. According to the official Maricopa Arizona Audit, this constitutes “spoliation of evidence.”

According to an update from the official Maricopa Arizona Audit Twitter account, controlled by Former Arizona Secretary of State Ken Bennett, a directory full of election databases from the 2020 election cycle was deleted by Maricopa County officials only “days before the election equipment was delivered to the audit,” despite being under a subpoena at the time. According to Bennett, this constitutes “spoliation of evidence.”

Breaking Update: Maricopa County deleted a directory full of election databases from the 2020 election cycle days before the election equipment was delivered to the audit. This is spoliation of evidence! pic.twitter.com/mY0fmmFXAm

According to the American Bar Association, “spoliation of electronically stored information (ESI) ranks at the top of the list” of pitfalls lawyers and their clients should avoid, as it “subjects the non-compliant party to a substantial likelihood of sanctions.” In one prominent court case, the court sanctioned the defendant by allowing evidence and discussion that would otherwise have been prohibited during the trial. The American Bar Association continues, parties are “under an obligation by court rules and case law to preserve relevant documents, including ESI, once litigation is reasonably contemplated.”

This came just before the revelation that the total number of ballots in pallets delivered to the Arizona auditors have wide discrepancies between the number that Maricopa County officials claimed were in the pallets and the actual numbers, with the number differing by 17.5% in one instance. According to political strategist Boris Ephsteyn, “anything above a tiny fraction of a percentage is unacceptable, by the way, unacceptable according to the Federal Elections Commission.” This led Ephsteyn to declare that Democrats are hiding the fact that it is likely “Joe Biden did not win in Arizona.”

Earlier this month, Maricopa County also refused to turn over electronic devices – in this case routers – that were used in the 2020 election, despite a Senate subpoena ordering them to do so. National File reported, “A letter signed by the Maricopa County Attorney’s Office and addressed to former Arizona Secretary of State Ken Bennett vigorously defended officials’ decision to not turn over internet routers, but did not elaborate on the purported risk that complying with the subpoena would cause.”

In other news...
Rep. Ilhan Omar Slams Israel for Defending Itself W...
Is White Privilege Real?
Biden Vows to Try and Pass Infrastructure Bill 'Wit...
The world is plotting the road back to normal…
Matt Gaetz Gets Devastating News In Federal Sex Tra...
The War on Everything
0 Comments
Inline Feedbacks
View all comments