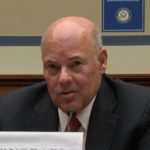 The Senate has confirmed Biden nominee Ron Stroman as a new member of the Board of Governors at the Postal Service, with 20 Republicans joining Senate Democrats in support of the pick. The Senate Republicans who voted in favor of Stroman included Susan Collins (Maine), Lindsey Graham (S.C.), Mitch McConnell (Ky.), and others, with — as could be expected — Ted Cruz (Texas), Josh Hawley (Mo.), and similarly minded Senate Republicans among those who voted against Stroman.

The Senate voted to confirm one of President Biden’s three nominees to the Postal Board of Governors, Ron Stroman, 69-30.

Stroman is a former deputy postmaster general, and he’s filling a seat on the postal board that was previously open. The board handles the hiring of the Postmaster General, meaning that it’s up to its members to fire current Postmaster General Louis DeJoy, who has attracted steep criticism for the damaging impacts of his policy moves on Postal Service operations. DeJoy has outlined a plan for coming years of Postal Service operations that calls for intentional slow-downs of some mail delivery as part of an effort to cut costs — although as a critical public service, cutting costs for mail delivery isn’t exactly a reasonable top priority.

During a recent hearing of the Senate Homeland Security and Governmental Affairs Committee where his nomination was under consideration, Stroman spoke of the “universal service obligation” held by the Postal Service. As he put it:

‘The universal service obligation of the Postal Service requires delivering prompt, reliable and efficient service to all Americans all over the country. And it starts, it seems to me, with having a plan to ensure that you have great service… That starts from the top of the organization and filters down throughout the organization.’

None of Biden’s three postal board picks, including Stroman, have committed to working to oust DeJoy — but their placements on the board would be an imperative first step towards getting him replaced. With all three of Biden’s nominees confirmed, the board would have five Democrats and four Republicans, which is the largest partisan split allowed by law.

Because of the legal mandate for no more than a simple majority of either major party on the board, two of the panel’s current Democrats are actually Trump appointees. One of those Trump-appointed Democrats, Ron Bloom, indicated last month that he backed DeJoy, adding another potential hurdle to the replacement process. Bloom’s time on the board, however, could be coming to an end — his term expired in December, and he’s currently serving out a one-year stint until either his own re-nomination or the nomination and confirmation of his replacement.

Dejoy has got to go. The mail is slow as heck especially in Texas and Florida. It’s getting ridiculous. Certified Mail is late by a week and a half, which is supposed to be 3 days.