May 13, 2021 Constitutional Nobody Education 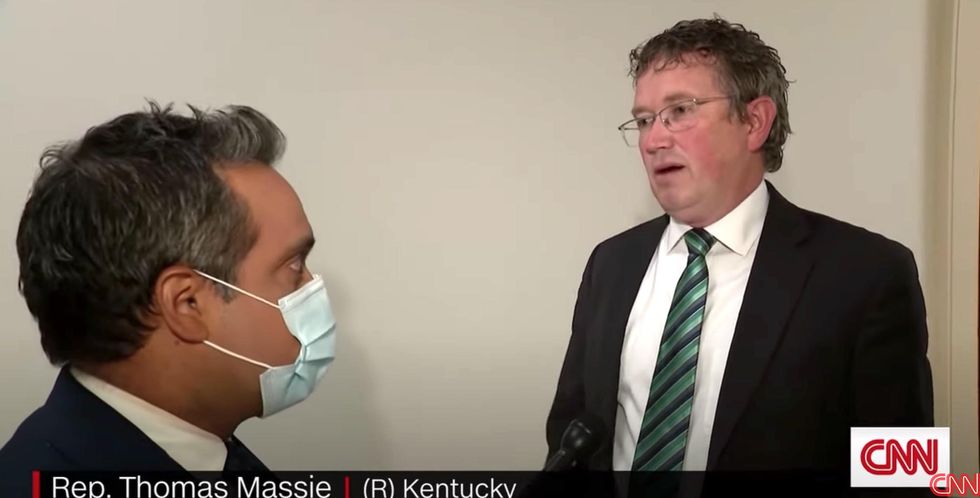 Republican Rep. Thomas Massie (R-Ky.) called out a CNN reporter for misrepresenting his comment about the Jan. 6 riot at the U.S. Capitol.

CNN’s chief congressional correspondent Manu Raju stopped Massie to pepper him with questions about the riot, but Massie says his report did not document his comment correctly.

“Do you agree with Trump that the election was rigged or stolen somehow?” asked Raju.

“We didn’t have hearings, there’s no way to litigate that up here. If you’re in the minority, the DOJ wouldn’t investigate it,” responded Massie.

“Are you concerned by suggesting that there’s something wrong it could lead to more violence?” asked Raju later in the interview.

“I don’t see any violence,” Massie said as he walked away.

The CNN report claimed that Massie said, “I didn’t see any violence,” as if he were denying the attacks on the U.S. Capitol in January.

Massie warned that he may not take any more questions from CNN unless the network corrects its report.

“I said ‘don’t,’ not ‘didn’t’ The audio is there for all to hear,” said Massie on Twitter.

“Please fix your article @mkraju @CNN I’m one of the few GOP folks who will even talk to you in the hallway. There will be zero if you insist on misreporting our words,” he added.

The CNN report tried to group Massie’s comment with other Republicans who refused to talk about the rioting at the Capitol or downplayed the violence that occurred.

Massie had previously earned the ire of former President Donald Trump when he tried to derail passage of the first coronavirus relief bill in March 2020. Trump called him a “third rate grandstander” and called for the party to expel him.

Here’s the misleading report from CNN:

In other news...
“You Better Be Right”: Michigan State Rep. Introduc...
Ted Cruz fires back at Joy Reid and liberals: Bigot...
America, The New Soviet Union?
White supremacy or black criminals?
What We See, What We Don’t See
Splinter the CIA into a Thousand Pieces and Scatter...
0 Comments
Inline Feedbacks
View all comments