Trump’s Blog Flops, His Statements Get Same Engagement on Gab, A Platform He’s Not Even On 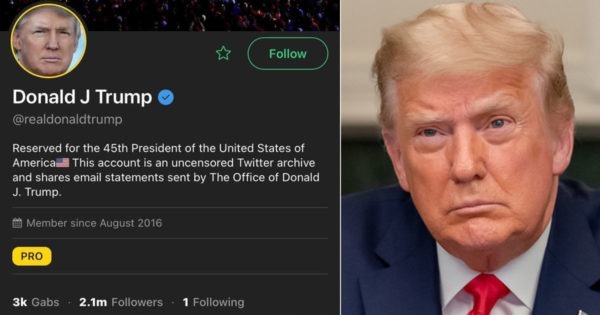 The official statements released by former President Donald Trump receive much more engagement on free speech social media platform Gab, which has been shunned by Trump’s team, than on the “Desk of Donald J. Trump” blog which launched earlier this month.

A report from NBC News, which celebrated the effectiveness that deplatforming achieved in limiting Trump’s ability to reach a wider audience, used third-party social media analytics firm BuzzSumo to analyze the engagement on Trump’s new blog, which only allows users to “like” posts and share links to Big Tech platforms.

“Trump’s new blog has attracted a little over 212,000 engagements, defined as backlinks and social interactions — including likes, shares and comments — received across Facebook, Twitter, Pinterest and Reddit,” NBC found. “Before the ban, a single Trump tweet was typically liked and retweeted hundreds of thousands of times.”

Trump’s team attempted to re-platform the President on websites Parler and Gab, but reportedly demanded access to user data, mass censorship of speech that Jared Kushner didn’t like, and other concessions that led to the negotiations falling through. Despite the Trump team’s refusal to join or even publicly reference Gab, however, the free speech platform has proven itself far more effective at circulating Trump’s statements than his widely panned new blog.

“Now, here’s the interesting thing, we are mirroring all of Trump’s statements, we’ve mirrored all of his tweets before he got banned, we mirrored all of his emails he’s been sending out for the months since he’s been banned from Twitter,” Gab CEO Torba said in a video message on Tuesday. “Now he launched this new blog where he puts out statements, unfortunately, you’re not allowed to comment on the statements, so it’s free speech for him but not for you.”

Torba went on to reveal that after adding up the sum total of engagements Trump’s statements reached during the same time frame when posted to Gab, they added up to “almost 200,000.”

“So, almost the exact same number of engagements that he got with this new blog across every Big Tech platform, he got just as many on Gab alone, which is really incredible,” Torba said.

In other news...
Where should we send your free Don't Blame Me, I Vo...
WATCH: King Cooper Briefing to Announce Changes to ...
Who was the worst media offender this week? Ingraha...
Red Alert Sirens Interrupt Funeral of Young Boy Kil...
Science Journals Support Claim that Pfizer Covid Va...
The Birth of a Middle East War?
0 Comments
Inline Feedbacks
View all comments